Carrum Downs is a residential suburb 36 km south-east of central Melbourne inland from the bayside suburb of Carrum. Most of the area is on the former Carrum Swamp.

Carrum Downs was a farming area until the 1980s, with the social centre being the primary school, opened in 1909, at the corner of Frankston-Dandenong Road and Bawden Street. In 1945 the Anglican church's Brotherhood of St Laurence began the building of an elderly persons' community about 300 metres from the school. The Carrum Downs village added married and single persons' cottages and hostel accommodation, set in a mostly heath or bushland environment.

The first main residential area was south of the Brotherhood village, with sites for schools and a drive-in shopping centre (1994) with forty shops. There are several neighbourhood reserves and a linear park along Boggy Creek. In the north of Carrum Downs, beyond the Brotherhood village, the next large residential area included a local shopping area on Frankston-Dandenong Road, Carrum Downs secondary college and a new, larger site for the primary school. The recreation reserve was trebled in size, with two ovals and tennis courts.

Peninsula Link freeway connecting Carrum Downs and Mount Martha opened to traffic in 2013. The 27 km road had been under construction since 2010.

The census populations of Carrum Downs were: 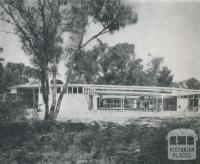