Carrum is a beach suburb 33 km south-east of central Melbourne. It was named after Carrum Swamp (see separate entry) which extended inland from Port Phillip Bay from Mordialloc to Seaford. The swamp was the outfall of the Dandenong Creek, and it is thought that its name derived from an Aboriginal word describing a boomerang.

Carrum was also the name of a local government borough (1920), the forerunner of Chelsea city.

The Carrum Swamp was made habitable by the making of the Patterson Cut (Patterson River) in 1879 through the sandy swamp, taking the water from Dandenong Creek directly into the bay. Patterson River is the northern boundary of the Carrum suburb, and the southern boundary is Eel Race Road, a reminder of the swamp’s food source for Aborigines. In 1881 the railway was opened between Caulfield and Mordialloc and the next year it was extended across the former swamp to Frankston. A station opened at Carrum.

With increasing habitation there came demands for a State primary school, and in 1900 the Carrum Swamp school opened. Situated about 3 km north of Carrum, it was too far from the railway station and adjacent new settlers. Carrum primary school opened in 1902, the same year as St Aidan’s Anglican church.

The railway station brought holiday makers and day-trippers. An early guest house was The Chalet, an elaborate two storey timber building, looking like a verandahed hill station. It burnt down in 1910. There was also Carrum Hall with a wine licence and an attached Mia Mia guest house. Campers put up tents along the foreshore, and the Carrum Fruit Café opposite the railway station offered a fine range of cordials and drinks. Overwhelmingly, though, most residents were farmers or market gardeners.

Carrum and all the places between it and Mordialloc were in Dandenong Shire. There was unsuccessful agitation for separation in 1916, but in May 1920 Carrum borough was created. Its area of 12.2 sq km extended from Mordialloc Creek to Eel Race drain and its inland (east) boundary was the drainage easement known as Secondary Drain. By 1920 there were railway stations at Aspendale (1897), Chelsea (1907) and Edithvale (1919). Chelsea was about central and had the borough offices and district court house (1928).

The borough was proclaimed a city on 8 May 1929 and named Chelsea (see separate entry).

Before creation of the borough the Carrum Electrical Supply Co Ltd began local supply in Chelsea in 1915. It continued until it was taken over by the State Electricity Commission in 1944.

Since the early 1900s Carrum had cricket and football clubs, and in 1928 a bowling club opened. By 1939 the Victorian municipal directory recorded bowls (1924), swimming, life-saving (1925) and tennis clubs. The directory also stated that Carrum was a popular seaside resort with a parking area, although train travellers could buy a day return ticket from Melbourne for 2 shillings and 5 pence (second class).

The Catholic church had a large new building (1941) and school in Chelsea, but in 1962 opened another church in Carrum, along with a school. Most of Carrum was covered with houses, and a long-awaited sewerage scheme for Chelsea city came into operation in 1965.

Carrum has a small shopping area on the Nepean Highway near the railway station and a continuous sandy beach that ends at the Patterson River where the war memorial stands. There are two public reserves, the larger with ovals and several sports facilities and club rooms. Boat launching ramps are along Patterson River. The Carrum primary school had 288 pupils in 2014.

Methane gas produced at the Eastern Treatment plant at Carrum was converted to electricity from 2007, creating 28,000 megawatt hours per year.

Carrum’s census populations have been: 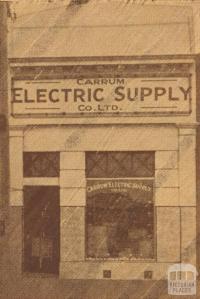 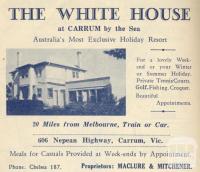