Connewarre is an ever shrinking rural locality in the Bellarine Peninsula. Its large Lake Connewarre is 12 km south-west of central Geelong. The name is thought to derive from an Aboriginal expression describing the black swan, a bird commonly found on the lake and adjacent wetlands.

An early farm settlement in the Connewarre district was Charlemont (1855) on Thompson Creek, north of Breamlea. The owner, James Noble, built a fine homestead and he was a member of the first Geelong council and the first road district board. In 1858 the Anglican church opened a school north-west of Charlemont, and this locality is roughly where the Connewarre reserve, memorial hall and Country Fire Authority are found. The school was replaced by a bluestone government building, which continued until 1993. There was also Presbyterian Connewarre East school (1864-75), and a Presbyterian church building (1915) became an aero club room at the Barwon Heads airfield.

North and east of the airfield there are Lake Connewarre and Lake Connewarre State Wildlife Reserve (34 sq km). The lake encloses part of the Barwon River stream bed and the estuarine river admits saline water to the lake in certain tidal conditions. The lake and reserve are important flora and fauna (especially bird) habitats and there are Aboriginal archaeological remains on the north shoreline.

Connewarre’s census populations have been: 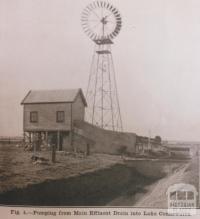