Coode Island, an almost uninhabited industrial area, is 4 km west of Melbourne. It was formed in 1886 when a canal was cut through the Sandridge swamp to provide a straightened stream for the Yarra River. The boundaries were the canal on the south, the Maribyrnong River on the west and the Yarra meander on the north and east. Its area was 97 ha. It was named after Sir John Coode, an English harbour engineer who was engaged by the Melbourne Harbour Trust to select the optimum route for the canal as part of the Port of Melbourne.

Coode chose the canal route so as to avoid dangerous tidal ebbs and inflows that would occur along one that went straight from the Yarra River docks to Hobsons Bay. Inflows endangered flood-prone land upstream as far as Gardiners Creek, by the banking up of stream waters. The route also ensured that the Yarra waters would discharge into the river mouth, scouring the bay and reducing silt deposition.

The meander was known as Fishermens Bend or Humbug Reach (1887). Later ‘Fishermens Bend’ came to be applied to the land opposite Coode Island, on the other side of the canal, and even to Sandridge Beach, Port Melbourne west, which became Garden City.

By 1909 the marshy surface of Coode Island was being filled for reclamation. Its chief use was as a quarantine station for stock, and buildings were constructed there in the event of the need for a bubonic plague sanitarium. Much of the native vegetation had been replaced by exotics, probably from abandoned ships' ballast. By the late 1930s the meander was almost abolished and the ‘island’ joined to West Melbourne, but the name continued to be used.

In 1929 the construction of Appleton Dock on the south-east corner of Coode Island was begun. Swanson Dock was excavated out of the island near its south-west corner when containerised cargo services began in the 1960s. MacKenzie Road was constructed southwards, west of Swanson Dock, and bulk petro-chemical storage tanks were built along it, beginning in 1960. The liquids were unloaded from Maribyrnong No 1 berth on the western bank of Coode Island.

In 1990-91 about 70% of liquid chemicals through the Port of Melbourne went through Coode Island. On 21-22 August 1991, fire broke out at a liquid tank storage facilities, destroying or severely damaging 27 tanks. The event provoked a review of the facilities, leading to proposals for its transfer from metropolitan Melbourne. A new site was not agreed, but in the meantime improved safety measure had lessened anxiety about future risks. 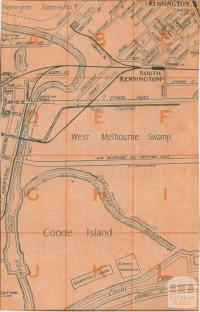 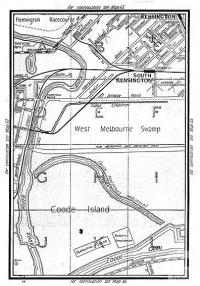