Daylesford and Glenlyon Shire thus originally comprised Mount Franklin Shire in its north, Glenlyon Shire in its south and the Daylesford borough (16 sq km) in its middle. The shire was immediately west of the railway line and the Calder Highway from Melbourne to Bendigo. A branch line from Carlsruhe, near Woodend, ran westwards through the Wombat Forest to Daylesford from 1880 to 1978, and from Daylesford to Creswick (1887-1953).

The railway passed through timber and agricultural towns such as Lyonville and Bullarto. At Daylesford the main economic base was gold mining (until 1928) and tourism from the many mineral springs. Tourism and spa water recovered popularity during the 1980s at both Daylesford and Hepburn about 5 km to the north. They are enclosed by the Hepburn regional park which has numerous walking tracks and visual attractions. Mount Franklin, about 15 km north of Daylesford, is an impressive volcanic cone. To the north-west there is the former gold town of Yandoit.

Daylesford and Glenlyon Shire had an area of 604 sq km. In 1995 the shire had ten hotels and motels with 387 bed spaces, supported by numerous bed-and-breakfast establishments. In 1994 farmland took up 27% of the shire's area, and carried 6800 cattle and 41,000 sheep and lambs. 4500 tonnes of potatoes were also grown.

On 19 January 1995, the shire was united with Creswick Shire and parts of Kyneton and Talbot and Clunes shires to form Hepburn Shire. The census populations were as follows: 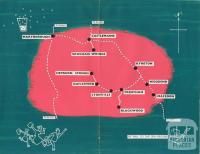 Map of the rail network to the spa region, 1959 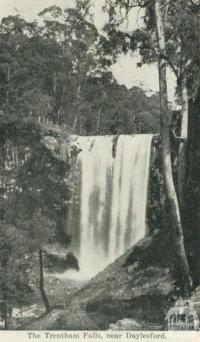 The Trentham Falls, near Daylesford 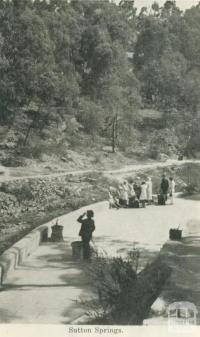