Delahey is a residential suburb, west of Keilor and 20 km north-west of central Melbourne. It was named after the Delahey family who purchased land and settled in Keilor in 1848. The husband, Henry, died in an accident in 1851 and his widow, Mary, continued the farm and brought up a family, several of whom also settled in Keilor.

Delahey was settled residentially in the late 1980s to mid-1990s. It has a primary school (1991) (the Mackellar primary school, 471 pupils, 2014), a campus of Copperfield secondary college, both in the middle of the suburb, and a substantial linear reserve. There are also smaller neighbourhood reserves, a community centre and a drive in shopping centre in Kings Road.

To the east of Delahey there is a large area reserved for radio transmission masts, which separate the suburb from the railway line between St Albans and Sydenham.

Delahey’s census populations have been:

The suburb is ethnically very diverse. At the 2011 census, among the various languages spoken at home there were high percentages of Vietnamese and Macedonian. 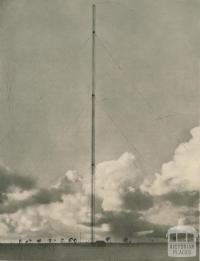