Dennington is an outlying urban area of Warrnambool, lying next to the Merri River and 4.5 km north-west of the city centre. It is on the Princes Highway and is the terminus of the South Western Railway.

Warrnambool has the Merri River on its west and the Hopkins River on its east. Both needed fording or some other form of crossing for Warrnambool’s produce to be successfully marketed to inland centres. A punt was provided for the Merri River in 1848, and in 1855 the local road board successfully agitated for a bridge to replace it. Coincidentally, a town was surveyed immediately east of the river, and it was named Dennington after the birthplace in Suffolk, England of Charles Hotham, Governor of Victoria (1854-56). Following the first land sales, a Wesleyan church was opened in 1856 and a school was opened two years later.

Bailliere’s Victorian gazetteer (1865) described Dennington as being an agricultural area, with a large tract under cultivation and used for sheep grazing. There was one hotel. When Dennington was described nearly 40 years later by the Australian handbook (1903), dairying had entered the picture:

In 1909 Nestle and Anglo-Swiss Condensed Milk began construction of a condensed milk factory next to the river, including workers’ cottages. Production began in 1911 and the factory became the world’s largest producer of condensed milk. Nestle took advantage of the good dairying capabilities of the Warrnambool district, and diversified into cream production (1929) and cheese (1935). After World War II, Nestle added dried coffee production to the factory. Up to 700 workers were employed (1963), but the number has since more than halved.  Condensed milk manufacture was moved to Tongala, but other products were substituted. The factory was taken over by Fonterra in 2005 for milk powder manufacturing.

Dennington has a Catholic church and primary school (1923), a small shopping area, a bowls club and a recreation reserve. The State primary school closed in 1996. A railway bridge (1890) over the Merri River is heritage listed.

Farmers were impacted by an approval in 2008 to rezone 135 hectares of farm land in North Dennington for residential development.

Dennington’s census populations have been:

Dennington Football Netball Club: history of the club from the known beginning in 1909 to the current day in 2012, Dennington, 2012 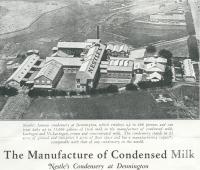