Dooen is a rural village in the Wimmera region of Victoria, 8 km north of Horsham on the Henty Highway, Immediately south of the village there is the Dooen Swamp, and Aboriginal relics and archaeological fragments have been found in its vicinity. It is thought that the name Dooen is derived from an Aboriginal expression describing a large swamp or a circle used for traditional ceremony.

In 1842 James Darlot and Charles Carter, the Horsham district’s first pastoral occupants, settled on rising land in otherwise flat country near the Dooen Swamp. The homestead for their Brighton pastoral run was nearby. Dooen was on the gold escort route from the Victorian goldfields to Adelaide during the early 1850s. In addition to the homestead, a hotel was opened. When a school was opened in 1876 there was a considerable number of farm selections, and in 1879 the railway line was extended from Murtoa through Dooen to Horsham.

The Wimmera River, south of the Dooen Swamp, was dammed by a weir and the water pumped out for farm and irrigation purposes during 1880-1939. The district thus had a mixture of sheep, wheat and more intensive agriculture. Creamery Road marks a time when dairying was thought to be a good prospect. A Presbyterian church was opened in 1886 – the building ultimately being removed to Natimuk – and a mechanics’ institute was opened in 1889.

Longerenong Agricultural College (1889) was established by the Council of Agricultural Education with an enrolment of 20 students. Variously run by the Department of Agriculture, the University of Melbourne and since 2005, Workco Ltd, the 1070 hectare farm is located about 5 km east of Dooen. The original buildings were lost to fire in 1940. In 1972, after a bitter fight, it became one of the first agricultural colleges to accept women students.

In 1903 Dooen was described in the Australian handbook: 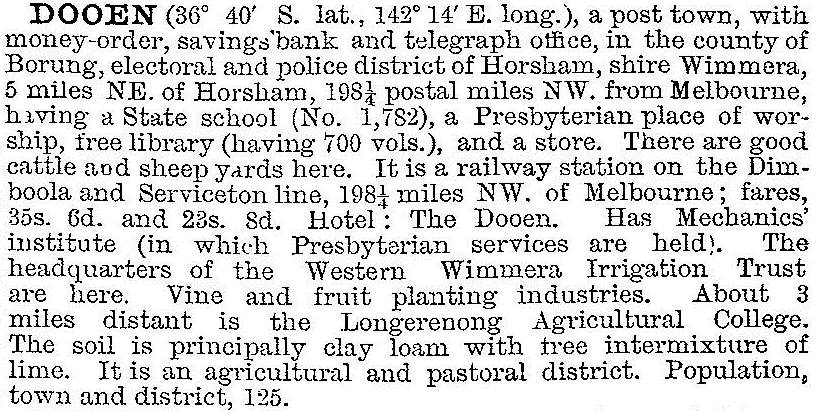 The railway station was used as a wheat transhipment area, and in 1939 grain silos were built. They were dwarfed, however, by a radio transmission mast (1936) over 200 metres high, next to the 3WV radio station building (1937-c1990). The distinctive radio mast with a 19 metre wide capacitive 'top hat' stands out in the vast flat landscape. Its reach on the AM radio band extended to Canada, Japan and South Africa. It was the first solid-state 50 kilowatt broadcast transmitter installed for the ABC and acted as a prototype for other services.

During the 1930s the Brighton homestead was demolished and some of the building materials recycled to the Dooen Golf Club house.

Dooen’s general store closed toward the end of the 1980s, and the school closed in 1993. The hotel and the golf club continue along with a public hall (1952) which replaced the mechanics’ institute. Dooen’s census populations have been: 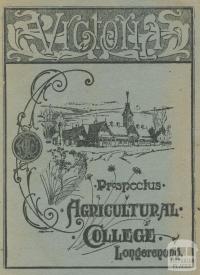 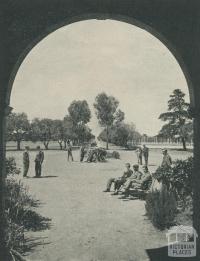