Dookie is a rural township and district 27 km north-east of Shepparton in northern Victoria. The area east of Shepparton is mostly flat, irrigated farm land, but Dookie is set in undulating country with Mount Major to the south of Dookie township. The Dookie Horticultural College is in the foothills of Mount Major.

In 1859 the Dookie district was surveyed, taking in much of the Emu Plains pastoral run. Local lore has it that Mrs Turnbull, wife of the station's proprietor, was so unhappy at the prospect of survey and possible farm subdivision that the surveyor suggested a place name derived from the Singhalese word duka, meaning sorrow. Mrs Turnbull had lived in Ceylon. Duka was re-spelt Dookie.

During the early 1870s farm selections were taken up and a township site at the foot of Mount Major was surveyed. It was named Dookie South, later Cashel, and adjoins the agricultural college. In 1886 the Dookie agricultural college was begun on the site of the Cashel Experimental Farm (1877) which grew a wide range of fruit, vegetables and cereals. Two years later the railway was extended from Shepparton to about 3 km north of Cashel. The town which formed around the station became Dookie. A large vineyard, one of over 30 in the district, was named Chateau Dookie. About 200 hectares of vines were planted and a large wine cellar and distillery were built. The property was converted to general farming in 1910 after vine diseases and a decline in the wine industry.

In 1903 the Australian handbook described Dookie:

The 1903 Australian handbook also included a brief reference to Cashel or Dookie South:

At Dookie there were also three stores, two blacksmiths, two butchers, a newsagent, two hotels, a newspaper, a hospital, Catholic (1898), Presbyterian (1892) and Anglican (1903) churches and a National Bank. The deserted bank is all that remains at Cashel. The school (1872) and the Victoria Hall and library (1892 and 1897) were the town's cultural centres.

Dookie became best known for the agricultural college. As a campus of the Goulburn Ovens TAFE and the University of Melbourne, Dookie offers a Bachelor of Applied Science (Agribusiness), along with short courses.

Dookie township has Anglican and Catholic churches, a school (45 pupils, 2014), a public hall, a hotel, shops, a golf course, an oval and tennis and bowling facilities. There is an agricultural and pastoral society, the successor to the Moira society (1877). A new community centre was built in 2006 at the recreation reserve. Swarms of locusts in plague proportions swept through Dookie in 2008.

Dookie's census populations have been:

At the 2011 census the population of Dookie and environs was 517 and farming accounted for 13.6% of employment. 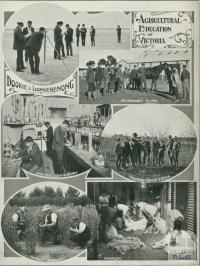 A veterinary class at Dookie College, 1918 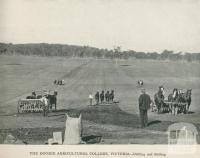 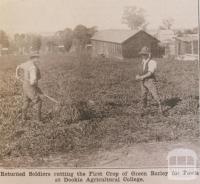