Doreen, a rural and residential suburb is 27 km north-west of central Melbourne and south of the Yan Yean reservoir. Its western boundary is the Plenty River and it extends eastwards to Arthurs Creek and Nutfield.

An early occupier of the area around Doreen was Patrick Reid, who named his holding Hazel Glen in 1844. In 1862 the Reid holding was subdivided for farms, and the additional settlers led to a Wesleyan/Methodist church being opened at the corner of Yan Yean Road and Chapel Lane in 1863. A school was opened in about 1867.

The cross roads (Bridge Inn Road and Yan Yean Road) became the district’s centre where a store (1890) and a recreation reserve were established. The name Hazel Glen was used until the opening of a post office in 1895, which was named Doreen by the Victorian Postmaster General, John Gavan Duffy, Member of the Legislative Assembly.

In 1908 a public hall was opened on the land set aside for the reserve. Doreen remained a rural backwater, and it was not connected to the State electricity grid until 1959.

In 1999 a group of private investors created a 2500 lot subdivision on 334 hectares west of Yan Yean Road, opposite the old Hazel Glen Uniting church and extending to the Yan Yean pipe track. (The eastern side of Doreen is in Nillumbik shire). Named Laurimar, the subdivision is in Whittlesea City. There are a town centre with shops, a primary school (2009) and a community hall, and an extensive linear park with a wetland. The main boulevard is Hazel Glen Drive. The school’s enrolment in 2013 was 966.

South of Bridge Inn Road and extending to South Morang, Doreen has been further subdivided for housing. It adjoins a campus of Ivanhoe Grammar School. This area has the Plenty Gorge Park on its west and Yan Yean Road on its east. Like Laurimar, the eastern land is in Nillumbik shire, and remains undeveloped except for the Doreen primary school (151 pupils, 2014) and the Plenty Valley Christian College. In 2013 State schools were at the ‘prospect’ stage, north of Bridge Inn Road and to the south-east in the direction of Yarrambat. The Hazel Glen College and a new Catholic primary school opened in Doreen in 2015. Doreen was identified as one of the population growth corridors in the north-west region.

Doreen’s census populations have been: 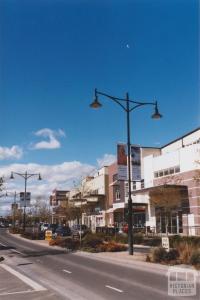