East Melbourne is a residential and commercial suburb which retains a number of religious and institutional buildings on land grants made during the nineteenth century. It borders central Melbourne's Spring Street, and its other boundaries are Victoria Parade, Hoddle Street/Punt Road and the Yarra River.

The Government surveyor, Robert Hoddle, prepared a plan for East Melbourne in 1837, with roads correctly running north-south and east-west on contrast to the skewed directions of central Melbourne's streets which took their axis from the direction of the Yarra River. Hoddle's plan had a grid layout north of the extension of Flinders Street, ie Wellington Parade, and the north-south Police and Government Paddocks from Wellington Parade to the river. The plan was not implemented, and settlement leap-frogged East Melbourne to Fitzroy, Collingwood and Richmond.

An early resident of East Melbourne was Charles La Trobe, Superintendent of the Port Phillip District, who was obliged to buy at auction the land he had chosen at Jolimont, off Wellington Parade, as the place on which to construct his transportable dwelling. He bought the land at his opening bid in 1840. La Trobe's cottage survives on a reserve across the Yarra River, near the Botanic Gardens.

Numerous reservations were made for churches and schools, particularly along Albert Street. Two early ones were St Peters Church of England, Gisborne Street (formally opened 1848), on the spot known as Eastern Hill, and on the other side of Gisborne Street, the St Patricks Cathedral and school. On an adjoining block to the south the Presbyterian, Lutheran and Unitarian churches were given reserves, and Melbourne's first Scotch College was also built there. Eastwards, at Eades Street, land was reserved for the Catholic Parade College (named after Victoria Parade), and a Presbyterian institution which became Presbyterian Ladies' College (1875).

These reservations are north of a larger reserve which became Fitzroy Gardens. To the east of the Gardens the Church of England was granted land on which were built Bishopscourt (the Bishop's Palace) and Holy Trinity Church (1864). Land was put aside for Government institutions along Spring Street. On the north-east corner of Spring and Albert Streets land for a school was set aside. On that site the National Model and Training School was opened in 1854, becoming a continuation and high school (1905-33), before being replaced by the Australian Medical Association's College of Surgeons (1935). To the south a reserve for a legislative assembly was laid out.

South of Wellington Parade the land comprised the Police Magistrate's and Government Paddocks, initially occupied only by Captain Lonsdale's residence south of Spring Street and by the La Trobes. By the mid-1860s five recreational ovals were marked out: the Melbourne Cricket Ground, Richmond Cricket Ground, East Melbourne Cricket Club ovals (two), and an oval in Gosch's Paddock, south of Swan Street. In addition the Hobson's Bay Railway Company had an easement to Richmond (1863) over the park and the Friendly Society's Gardens (now Olympic Park), and Scotch College oval were marked out. Lastly there were the Victorian Volunteer Engineer's Depot and Gustav Techow's National Gymnasium, west of Jolimont.

When the La Trobes left Victoria, Sir James Palmer (former owner of the Hawthorn punt and Mayor of Melbourne), bought their property. Private streets were laid out, including two named Agnes and Charles after the La Trobe’s children, and a quiet residential precinct emerged, save for a footwear factory with the La Trobe’s cottage in its back yard until the rickety remains were saved in 1959.

Most of the East Melbourne land left for private occupation was sold in 1852-53, and the land east of Simpson Street was sold in 1858. Residential East Melbourne was convenient for Parliamentarians and Government officials when the Parliament was transferred from St Patrick's Hall to the new reserve in 1856. It was also convenient for City merchants and professional people. The most famous was Cliveden Mansion, opposite Jolimont railway station. Built in 1887, the mansion was replaced by the Hilton Hotel in 1969.

East Melbourne has several open spaces. The largest, first named FitzRoy Square, was initially a dumping ground for refuse until handed over to the council in 1855. The council had the good fortune to engage a landscape gardener, James Sinclair, who laid out the Fitzroy Gardens. Some twentieth century additions to the Gardens include Cooks' cottage (ie Captain James Cook's parents' cottage), Ola Cohn's fairies' tree, sculpted from a bluegum, and a model Tudor Village presented in appreciation of Victoria's assistance during Britain's post-war food shortages. Nearby are the Treasury Gardens, laid out on a former reserve for Government offices. They, too, had been a dumping ground until a large gully was filled in during the 1870s. There are also two small neighbourhood parks, Darling Square and Powlett Reserve.

The easterly Albert Street/Victoria Parade corridor has several notable buildings additional to those for which Crown reservations were made. Closest to central Melbourne is the I.C.I. building, built in 1958 and Melbourne's tallest until 1961. Proceeding east there are (or were) the Salvation Army Training garrison (1900), Jewish Synagogue (1877), Baptist Church and offices (1855), Metropolitan Fire Brigade's Building (1892, with a look-out tower on Eastern Hill), and the Royal Victorian Eye and Ear Hospital (1878). Further east is the Victorian Artists' Society and Conservatorium (1892), and the Masonic Centre on the site of the old Presbyterian Ladies' College.

The Victoria Brewery (1854) grew to occupy a large site in Victoria Parade at Powelett Street, but it was decommissioned in the 1980s and converted to apartments in the next decade.

The medical industry's strong presence in east Melbourne is evident from doctors' rooms along Albert Street and the Mercy and Freemason's Hospitals (1935 and 1937), in Clarendon Street. St Andrews Hospital (1934), is on the old Scotch College site in Lansdowne Street.

Despite all these institutional uses, residential occupation has been strong in East Melbourne. This had been evident in church attendances and in the opening of the Yarra Park primary school (1874) in an area which was subdivided from Yarra Park in 1881. The Victorian Infants' Asylum was given land in this subdivision, evolving to the Berry Street Babies' Home, which has widened to child and family care.

East Melbourne's residential building stock was mature by the 1890s Depression, and gradually declined in desirability as mansions were internally converted to flats and cottages were let go. By the early post-war years the prospect of redevelopment was evident, and municipal and private improvement endangered the urban fabric. When the Melbourne council cut down some mature elm street trees, it galvanised the formation of the residents' East Melbourne Group. This coincided with the publication of the ground-breaking Early Melbourne architecture (1953), followed shortly by the National Trust (1956). Attention was focused on East Melbourne's built heritage and nearly all of East Melbourne was specified as an historic precinct in the Register of the National Estate, 1981. Fifty buildings were separately registered. Over 70 buildings and structures, including the I.C.I. building, are on the Victorian Heritage Register.

The Melbourne Cricket Ground dates from 1853, having also become a home ground for several football clubs. It has a seating capacity of 120,000, and its curtilage was enlarged when light towers were constructed for night events (1984).

On the other side of the railway line part of Flinders and Yarra Parks was taken in 1985 for the National Tennis Centre, the Government's initiative to replace the Kooyong venue. These mass entertainment facilities, together with those at Olympic Park, draw very large crowds. Train services from Richmond and Jolimont and tram services along Swan Street and Wellington Parade carry many patrons, but private cars cause traffic and parking congestion. East Melbourne's streets have intersection roundabouts and resident-only parking. Residents gain respite from urban congestion with handsome road verges and the Fitzroy and other gardens.

East Melbourne’s census populations have been: 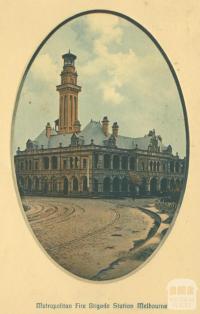 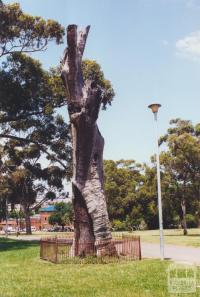 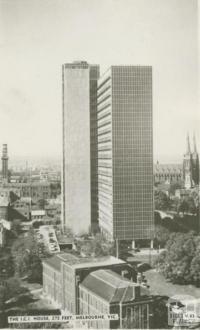 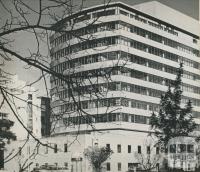 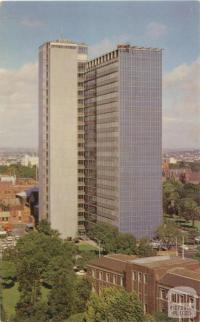 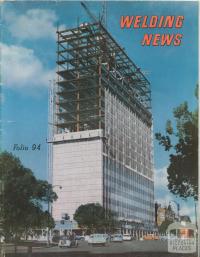