The name Eildon is known for its association with Victoria's largest water storage about 104 km north-east of Melbourne. It is also the name of a town established after the enlargement of the dam (1948-56), and is located about 2 km west of the wall of the Eildon Reservoir.

A pastoral station purchased by Archibald Thorn in 1848 was named after his wife's birth place, the Eildon Hills, near Abbotsford, Scotland. Increased settlement led to the opening of a school in 1863, which was superseded by a state school in 1875.

In 1914 the State Rivers and Water Supply Commission began the construction of the Sugarloaf Dam at the headwaters of the Goulburn and Delatite Rivers, Eildon township being on the south side of the Goulburn. The Sugarloaf Waterworks school was established (1916) along with the housing for construction workers, and renamed the Eildon Weir primary school in 1923. By the 1940s the resulting township, named Eildon Reservoir, had a church, school, post office, recreation ground and numerous other buildings. It was about a kilometre beyond the dam wall, the hydroelectricity power house and transformer power house.

In 1950 work began on the construction of a dam wall downstream to enlarge the water storage. The work was carried out by an overseas firm, Utah Construction Company, and involved the construction of extensive workshops, housing and hostel accommodation. Before the project was finished the State Rivers and Water Supply Commission sought enquiries and submissions for peopling and industrialising the new township. The Commission foresaw the growth of tourism and fishing, remarking that the region's tourism attraction was well known. Trout would be released from the nearby Government fish hatchery at Snob's Creek. The Utah works area was purchased for making masonite wallboard, and the State Electricity Commission's hydroelectric generation plant was a large employer. Subsequently tourism became the major industry, with boating on Lake Eildon (138 sq km), fishing and recreation in the Fraser National Park. Eildon has a visitor information centre, a recreation reserve, a health centre, Anglican, Catholic and Uniting churches, several hotel/motels, caravan parks and a camping ground. In 2011 Fisheries Victoria released 30,000 Murray Cod fingerlings into Lake Eildon. Eildon primary school had 38 pupils in 2014.

The Eildon State Park is 6 km south of the township.

Eildon's census populations have been:

A typical scene of the lovely Eildon Lake

The pondage weir at Eildon 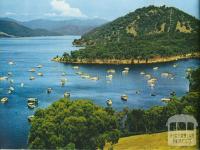 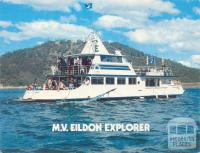