Eganstown is a rural village on the Midland Highway, 7 km south-west of Daylesford.

The area was occupied for pastoral purposes in 1840, and in 1847 James Egan acquired the pastoral lease and named the run 'Corinella'. Egan subsequently discovered the first gold at Daylesford. The village which developed near Corinella was known as Deep Creek, however, and was not renamed Eganstown until 1881.

The Deep Creek school was opened in 1861, and a Catholic church in 1863. The area was second to Daylesford for gold mining yields, with a population of around 2000 during the 1860s. Champagne Gully was a rich alluvial field, situated in the Blanket Flat field. The Deep Creek township contained four hotels, several stores, four churches and three halls.

Mining continued alongside agriculture until the turn of the century, and in 1903 Eganstown was described in the Australian handbook:

There are several springs in the vicinity: the Brandy Hot (named after a gold field) and Deep Creek, north of Eganstown, Golden Wattle and Corinella to the east, and the Eganstown spring south of the village.

The St Francis Xavier chapel and Catholic cemetery (1867) are on the Victorian Heritage Register and, along with the springs and picturesque scenery, comprise Eganstown's main visual features. Egan's Corinella homestead (1861) remained in the family.

Eganstown's census populations have been: 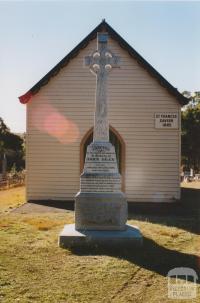 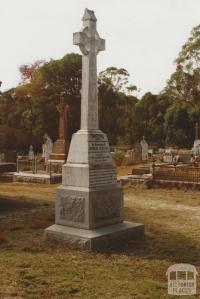