Eldorado is a picturesque township with a mixture of agriculture and extensive former mining works. It is on the Reedy Creek (also known as Reid’s Creek, Eldorado Creek and Woolshed Creek), and has hilly, forested country to its immediate north and east. It is 20 km east of Wangaratta in north-eastern Victoria.

The name originated not with the mining activity but with the Barambogie pastoral run taken up by William Baker in 1840-41. Baker renamed his Barambogie run Eldorado.

In 1854 rich fields of gold were found at Woolshed and Sebastapol, east of Eldorado along the Reedy Creek. In June of the same year gold was also found at Eldorado, but it was too deep for individual prospectors. Within a year, however, syndicates and companies undertook sluicing and extraction from shafts. Tin and gold were obtained and gems were found in Reedy Creek. In 1859 the long running McEvoy Company began mining operations, which were not curtailed until the McEvoy mining disaster in 1895 killed six mine workers. Based on reports of the mining register, the boom mining years at Eldorado were from 1868 to 1876.

Numerous Cornish miners and their families settled at Eldorado, resulting in a Methodist church being opened in 1861. An Anglican school was opened in the same year. In 1903 the Australian handbook described Eldorado: 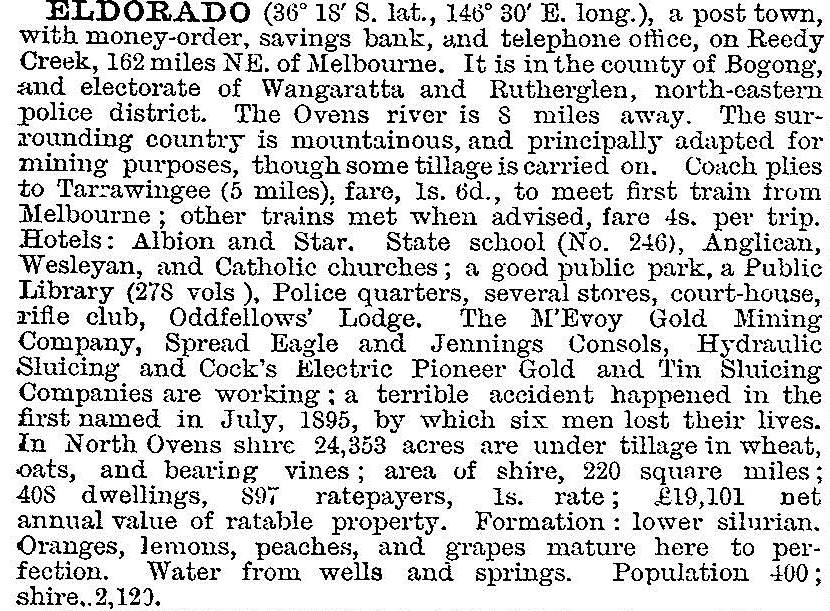 At about the turn of the century, John Cock, the son of a Cornish miner who came to Eldorado in 1858, floated Cock’s Pioneer Electric Gold and Tin Sluicing Company. It resorted to open cut sluicing after the abandonment of dangerous underground mining. Extraction by sluicing continued until 1942. In 1935 Cock’s Eldorado Company commissioned a floating dredge for mineral extraction when rising gold prices stimulated investment. The dredge was built by the Thompson engineering works, Castlemaine, and weighed over 2000 tons. Powered by cheap electricity from the State Electricity Commission it operated until 1954. It is on the Australian and Victorian Registers of historic buildings.

Eldorado has three churches, a post office, a museum (1971) in a former school building, a memorial hall, a caravan park and a recreation reserve. The primary school was closed in 1993. Farming and orcharding are around the town area.

Eldorado’s census populations have been: 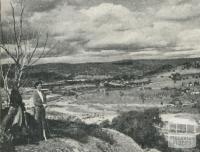