Falls Creek, an alpine resort at the headwaters of the Kiewa River, north-east Victoria, is 90 km south-east of Wodonga.

In 1938 the State Electricity Commission of Victoria (SEC) began construction of the Kiewa hydroelectric scheme and by the end of World War II had established the Bogong village and a nearby power station. The full scheme involved the construction of two reservoirs on the Kiewa River's headwaters at Pretty Valley and Rocky Valley. The latter storage, the larger of the two, is 3 km upstream from Falls Creek.

The Country Roads Board undertook road construction and apparently renamed a short stream, Horseshoe Creek, as Falls Creek because of its waterfall.

By 1946 three local ski clubs and SEC employees had lodges at Falls Creek. In 1951 an elementary ski tow was installed and several commercial lodges were established during the 1950s. Two T-bars were opened in 1961. In 1964 the Victorian municipal directory recorded that Falls Creek had 29 ski club lodges and 16 commercial lodges, with further expansion under way.

By the 1980s Falls Creek was second to Mount Buller in accommodation and visitation numbers. Both rely on snowmaking machines. Falls Creek has retained its second ranking, but by the 1990s Mount Hotham and its neighbouring Dinner Plain were gaining on Falls Creek, and the construction of an airport near Mount Hotham in 2000 intensified the trend.

Falls Creek has a licensed supermarket, a pharmacist, a newsagent and a medical centre. It has diversified into a four seasons resort and has a food, wine and wildflower weekend. There are numerous high plains walking trails. A primary school which was opened in 1972 had 9 pupils in 2014.

Falls Creek census population have been:

Julian Newton Brown, Falls Creek: how it came to be, 2005

Ski School with Village T-Bar in the background, Falls Creek 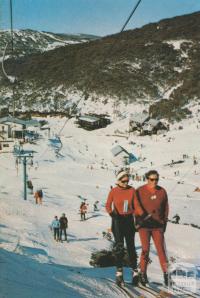 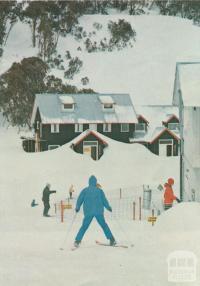