Fairfield, a residential and industrial suburb east of Northcote, is 6 km north-east of central Melbourne. It includes a southerly portion surrounded on three sides by meanders of the Merri Creek and the Yarra River, chiefly consisting of open space and once containing institutions dating from colonial times, notably the Yarra Bend asylum.

Land sales in the Fairfield area were included in those extending from Northcote to Alphington in 1840. The early villages were Alphington and Northcote (where today's Westgarth is situated). In the early 1880s a land speculator, Charles Henry James, bought up large tracts of land in the district, and sold some of it in subdivided form in an estate named Fairfield Park, apparently a name taken from Derbyshire. (James is acknowledged to have been one of Melbourne's first and most successful land boomers, but the Depression of the 1890s saw him lose his Illawarra mansion in Toorak and repayment of his debts at 6.75 pence in the £1.)

In 1888 the railway line through Fairfield Park, from Collingwood to Heidelberg, was opened, and Fairfield Park was the junction of the Outer Circle railway from Oakleigh (1891-93). James also had a tram service along Station Street, from the station to Mansfield Street running from 1884 to 1890, connected to the railway line that between 1884 and 1888 ran only from Clifton Hill to Alphington (the line from ‘no where to no where’). Fairfield was thus launched with a high degree of attention to public access, and the house blocks sold well. They were reasonable value for money in that they were bigger than the standard blocks closer to Melbourne.

Fairfield's other place of settlement was at Yarra Bend, where in 1848 the Metropolitan Lunatic Asylum was opened. By the 1860s it housed over 1000 people, with on-site growing of food and its own bootmaker. The second institution to open at Yarra Bend was the Queen's Memorial Infectious Diseases Hospital (1904), or the Fever Hospital. The Hospital was to the north of the present Eastern Freeway and the Asylum mostly to the south. A portion of the Asylum immediately north of the freeway became Fairlea Women's Prison, 1925-96. The balance of the Asylum buildings and grounds are now occupied by a public golf course, open space and sports ovals.

In the township area a Methodist church was opened in 1887 and a primary school in 1891, serving both Alphington and Fairfield. There were five stores, the Fairview Hotel, an Anglican church and a Church of Christ. The Depression of the 1890s slowed but did not stop Fairfield's growth. In 1903 the Australian handbook described Fairfield Park: 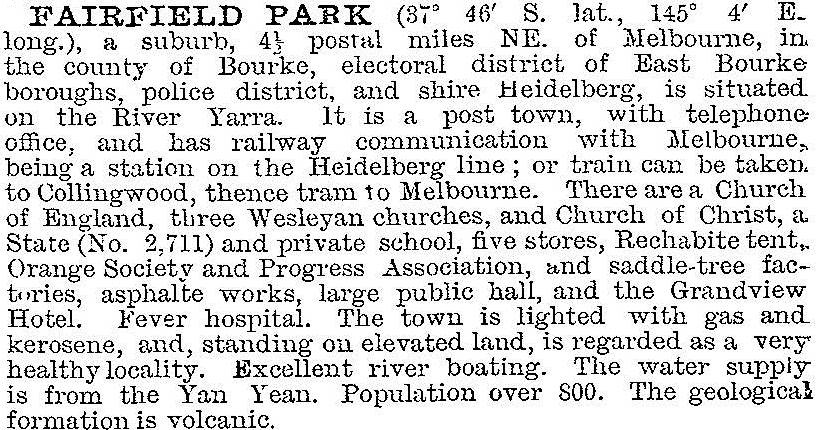 Apart from the riverside meanders which have mudstone adjoining them on the Fairfield side, all of Fairfield is on basaltic land. Consequently it did not have brick-claypits like neighbouring Northcote, and only one quarry at its northern edge. Fairfield thus developed as a mixture of comfortable residences – usually timber – and light industrial uses. The flood-prone Fairfield Flat was drained in 1907-08. Station Street became the main shopping strip and by the mid-1920s had a mature range of shops and the Park picture theatre. The Fairfield North Primary school (actually in Thornbury south), opened in 1928.

Further south the Women's prison and the Infectious Diseases Hospital were closed in 1996. Both closures caused controversy: the prison on the grounds that women experience discrimination in mixed-gender prisons and the hospital because of the breaking up of expertise and research facilities. In February 1997, approval was given to build the Victorian Institute for Forensic Psychiatry (later Victorian Institute of Forensic Mental Health) on the hospital site. The facility, named the Thomas Embling Hospital, is an asylum for the criminally insane and was opened in 2000. It is adjoined by a campus of the Northern Melbourne Institute of TAFE.

Fairfield's census populations have been:

Andrew Lemon, The Northcote side of the river, City of Northcote and Hargren, 1983

Northcote, glimpses of our past, Northcote Historical and Conservation Society, 1988 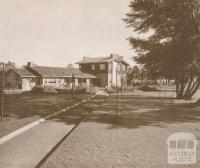 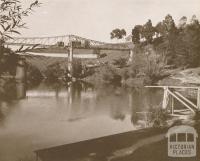 The Queen and Duke of Edinburgh passing the gates of the Fairfield Mill, 1954 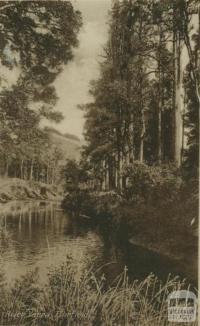