Flinders, a coastal township on the Mornington Peninsula facing the western entrance to Western Port Bay, is 74 km south of central Melbourne. It was named after Captain Matthew Flinders, explorer and navigator, who entered Port Phillip Bay in April 1802. He climbed Arthurs Seat and later saw Western Port Bay, but did not set foot on the place where Flinders is situated.

Flinders probably began as a seasonal fishing settlement, with a small number of farms as selections were taken up during the late 1850s and 1860s. A pier was built in 1865 and a school was opened in 1866. In 1869 a submarine communications cable from Tasmania was joined to Victoria's shoreline at Flinders.

Flinders was relatively remote from Melbourne until the opening of a railway line to Crib Point, 20 km northwards on Western Port Bay, in 1889. The Katoomba guest house (1886) at Flinders gained improved prospects of patronage, the Flinders Hotel was opened in 1890, and in the early 1900s there were seven guest houses at Flinders. A racecourse was opened in 1902 next to a golf course which was laid out in 1903. When the racecourse closed in 1923 its land was added to the golf course, which has spectacular seaward views.

With a population of about 200 people and as many again at holiday time, Flinders was described in 1903 in the Australian handbook:

An Anglican church had been built in 1892 and a Presbyterian (later Uniting) church was built in 1936. These institutions, along with the mechanics' institute and local hotel, sustained an agricultural community farming the surrounding land which had been converted from a timbered landscape to grassland.

A promontory of decomposed basalt overlain by sands forms a separation between Bass Strait and Western Port Bay and, correspondingly, between Flinders' ocean and sheltered beaches. The promontory, known as West Head, was acquired by the Navy in 1939 and converted to a gunnery range in the 1950s.

The ocean beach, lying below the golf course, is joined to a westerly linear coastal reserve. The Western Port beach has the jetty, yacht club (1983), picnic areas and the site of the cable station. Guest house patrons have been replaced by Melburnites' holiday houses: in 2011 over 65% of houses in Flinders were unoccupied on census night.

Flinders has a shopping area (including a prominent general store and a surf shop), a hotel, two motels, a recreation reserve, bowling and tennis facilities and an Anglican church. There is no school, the one at Flinders having been closed in 1951 when the Red Hill consolidated was opened.

Flinders' census populations have been:

In the 2011 census the median age of residents was 55 (Australia, 37 years) and on census night 65.6% of houses were unoccupied (ie holiday houses).

Rebecca L. Hoppen, Rebecca's Flinders: my life and some history of Flinders, the author, 1985 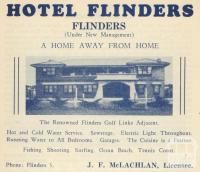 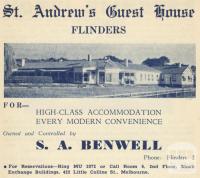