Flinders Shire (1874-1994) was at the western end of the Mornington Peninsula, Port Phillip Bay, extending from Point Nepean to an irregular boundary that began immediately south of Mount Martha and ended at Shoreham on Western Port Bay. It included all the Port Phillip Bay beaches from Portsea to Safety Beach, and the Bass Strait coast including Cape Schanck and Flinders. Its area was 324 sq km.

It began as the Flinders and Kangerong Shire on 24 December 1874. The name came from Captain Matthew Flinders, explorer and navigator, and from land known as the Kangerong basin.

Flinders was the shire's southerly point of settlement and Kangerong was its northerly point.

The shire's other places of settlement were Point Nepean (quarantine station and fortification protecting the entrance to the bay), Portsea and Sorrento (holiday resorts), Rye (fishing and lime extraction), Cape Schanck (lighthouse) and Dromana. Arthurs Seat, near Dromana, was the most prominent land form, backing on to ranges which were used for timber harvesting, orchards and dairying. The settlements in the ranges included Main Ridge and Red Hill. Timber was also cut from the coastal areas for lime burning and, later, bakers' ovens. Much of the sheoak and banksia were replaced by tea tree regrowth.

Bay steamers popularised Portsea, Sorrento and Dromana, and even greater popularisation came with motor cars and foreshore camping. Rosebud emerged as the urban regional centre, and in the 1970s the shire completed the transfer of its work depot and shire offices from Dromana to Rosebud. Rail transport to the shire was non-existent along Port Phillip Bay (the line terminating at Mornington), but a branch line entered it from the south-east, with stations at Merricks and Red Hill. The line (1921-54) carried mainly goods and orchard produce.

Flinders shire was described in the 1946 Australian blue book:

In 1966 Dromana-Portsea was enumerated as one unit for the population census. It had 79% of the shire's population. Motor traffic drew vastly more holiday makers, and Point Nepean Road was duplicated in stages by the Mornington Peninsula Freeway to ease the traffic congestion.

In 1994 farming occupied 35% of the shire's area. There were 9250 meat cattle, 6250 sheep and lambs and an apple crop of 1.97 million kilograms. The numerous small wineries harvested 265 tonnes of grapes.

On 15 December 1994, Flinders Shire was united with Hastings and Mornington Shires and Frankston city to form Mornington Peninsula Shire.

In 1960 part of the shire was transferred to Hastings Shire, and the subsequent populations were: 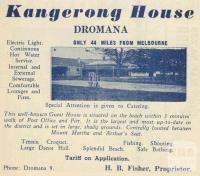