Glen Waverley, the terminus of a metropolitan railway line, is a residential suburb 19 km south-east of central Melbourne. The suburb is large, extending from Blackburn Road to Dandenong Creek and from Highbury Road, East Burwood, to Ferntree Gully Road.

The area was first named Black Flat. In 1868 when the area was occupied by farmers, orchardists and wood carters, a school was opened. By the 1880s there was a post office and a rudimentary village around the intersection of Springvale and Waverley Roads, and residents of Black Flat felt confident enough to seek a railway line connection. They were unsuccessful. Some residents were also discontented with the name and various proposals were considered over ten years. Finally Glen Waverley was settled on in May 1905, deriving from a privately surveyed township (1853), at the south-east corner of High Street Road and Stephensons Road, named by its owner after Sir Walter Scott's Waverley novels.

In addition to farming, two early industries were gold mining (short lived, 1896), and pigment mining. The Victorian municipal directory, 1909, described Glen Waverley as having a hotel, stores, a bakery, good orchards and a recreation ground. (The school, a handsome structure built in 1880, is now heritage listed and used as a community centre).

In 1909 a mechanics’ institute and free library were opened, serving as a community focus and as the venue for Anglican church services until St Paul's church was built in 1921. A Catholic church (1913) was next door to the mechanics’ institute. The railway line connecting Glen Waverley to Melbourne was opened in 1930, and the 1933 census population showed a 50% increase over the 1911 figure of 238 persons. Notwithstanding the area's proximity to the railway line the outward spread of urbanisation from metropolitan Melbourne had substantial broad acres to fill in before reaching Glen Waverley. In the late 1940s the village had a recreation reserve, two shops and the few community facilities already mentioned. By 1954 a planned shopping centre near the railway station was being developed and the Mulgrave shire was contemplating new offices nearby. Among the seven shops one was described as a supermarket in 1955 in the Victorian municipal directory.

During the 1960s Glen Waverley underwent rapid residential growth. A primary school and a high school were opened in 1960 and 1961 respectively, the latter year coinciding with the change of Mulgrave shire to Waverley city. In 1974 the Council designated Glen Waverley as a district centre and in 1982 collaborated with the Victorian Railways in securing land for a second shopping centre. The drive-in open air Kingsway shops were soon overshadowed by the climate controlled drive-in centre known as The Glen. The Glen was enlarged in 1996 by the addition of a David Jones department store. The Kingsway area has the Monash Council offices and two high rise hotels.

Much of Glen Waverley’s housing was built on private sector estates. A.V. Jennings was a prominent builder, but the outstanding example was built to a Robin Boyd design near Brentwood secondary college. Power lines were put underground. It followed an earlier Boyd design (Appletree Hill) and a Merchant Builders project, both between Gallaghers Road and the Dandenong Creek.

The population growth attracted a second campus for Wesley College in the mid-1960s, and the Catholic seminary on a prominent hill off Waverley Road became the Victorian Police Academy. The Academy acquired a mock railway station for training purposes in 2012. In the 1980s Glen Waverley had nine State primary schools and four State high schools. Taking Springvale Road as a dividing north-south axis, the schools were, from north to south:

* Syndal is described in a separate entry

The Catholic primary school in Springvale Road opened in 1959 and the one in Syndal opened in 1960.

The eastern (Dandenong Creek) side of Glen Waverley has a linear park, a golf course and sports oval. Reserves, some with ovals, are set amidst the housing areas, and the predominantly generous allotments on which the houses are built provide households with open space. The configuration of the residential streets as one moves away from the railway station becomes increasing less grid-like, showing how protection from traffic overtook the earlier preference for convenient through traffic routes.

The census populations of Glen Waverley have been:

Susan Priestley, Cattlemen to commuters: a history of the Mulgrave District - now the City of Glen Waverley, 1839-1861, John Ferguson, 1979 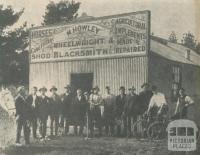 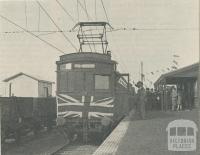 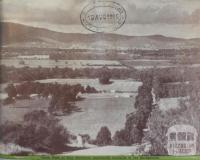 Creek flats at Glen Waverley: Dandenong foothills in the background, 1946