Glen Iris is a residential suburb 10 km south-east of central Melbourne. To its north is Camberwell and to its west is Malvern, and Glen Iris was in each of those two former municipalities. Its situation remained the same with the creation of the amalgamated municipalities of Boroondara and Stonnington.

Glen Iris lies either side of Gardiners Creek. Its name comes from that of a residence built by a solicitor J.C. Turner. He had acquired his land from a settler who had travelled to Victoria on the ship named the Iris.

Glen Iris includes the small locality of Gardiner which, with the creek of the same name, was named after John Gardiner who overlanded stock to Port Phillip from New South Wales in 1836. Gardiner pastured his stock near where Gardiners Creek joins the Yarra River.

Unlike Camberwell, Hartwell and Box Hill which were situated on roads or had inns for travelers, Glen Iris was a place of farms overlooking the Gardiners Creek Valley. The population growth was sufficient, though, for a Methodist church to be built in 1865 and a school in 1872. Both were in Glen Iris Road and continued into the twenty-first century. A general store was opened nearby in 1882, where a small local shopping centre continues to function.

Glen Iris was described in the 1903 Australian handbook:

In 1890 a railway line was opened from Burnley to Oakleigh running via the Glen Iris Valley (as the Gardiners Creek Valley was called). The line in fact joined the Outer Circle line a little east of Glen Iris, and it was truncated when the Outer Circle line was partly closed in 1895. The line had three stations in the Glen Iris district – Tooronga, Gardiner and Glen Iris. Residential change came first in the Malvern part of Glen Iris, which by 1917 had three tramlines – Malvern Road, turning north into Burke Road, Wattletree Road, terminating at Burke Road and High Street terminating at Glen Iris Railway station. The proximity of the train and trams made the area suitable for schools, Sacre Coeur (1888) and Korowa (1890) Girls' Schools and a campus of Caulfield Grammar.

On the eastern side of Gardiners Creek no tram serviced Glen Iris. Residents were between the Glen Iris railway line on one boundary and the Ashburton railway line on the other. Glen Iris is an area dominated by middle-class housing on generous allotments. There is no notable shopping centre, the only two small ones being at the railway stations on the western side of Gardiners Creek. Glen Iris' primary schools are Camberwell South (1925) and two Catholic (1930, 1932).

When the South Eastern Freeway was opened in 1970 it ended at Glen Iris, entering roads which meandered into the suburbs. Extension of the Freeway was projected along the Gardiners Creek Valley, the initial plan involving the taking of over 300 homes and adversely affecting another 570. Residents of Glen Iris opposed the Freeway, the loss of houses and the loss of a rather degraded creek. The debate went on for 15 years resulting in a scaled down program of land acquisition, the renaming of the Freeway as arterial, and a revegetated linear parkland along the creek, below an elevated roadway that now emits a constant traffic noise. There are several reserves and ovals adjoining the creek, which has caused serious floods at intervals of as little as ten years. A tributary of Gardiners Creek, Back Creek, also has a linear park.

In 2000 Glen Iris was enlarged eastwards to Warrigal Road taking part of Burwood. In 2014 the state government announced plans to remove the Glen Iris level crossing by 2017. 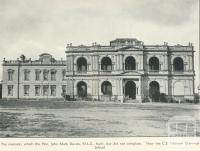