Glen Huntly is a residential suburb 11 km south-east of central Melbourne served by a railway line (1881) and a tram (1889). It is south of the Caulfield Racecourse.

On 7 April 1840, the ship Glen Huntly arrived in Port Phillip Bay with fever on board, probably typhus. A quarantine station was set up at Point Ormond, and a track leading inland from the Point became known as Glen Huntly Road. About 6 km eastwards along the road the suburb of Glen Huntly was formed.

Despite the presence of public transport in the 1880s, residential development was small. The area was occupied by farmers. The Anglican St Agnes church was opened in 1888 in Booran Road. A later church was the Congregational one (1909), the building being a weatherboard Primitive Methodist structure transported from South Melbourne. It is on the Register of the National Estate, having been acquired for Greek Orthodox worship in 1983.

Glen Huntly was described in the 1903 Australian handbook:

In 1907 the Closer Settlement Board established the Clerk's Home Estate, but by 1909 Glen Huntly had fewer than 60 houses. It was described as a pleasant locality with charming views. In the next 15 years housing estates were marketed and in 1914 the primary school was built. St Anthony's Catholic church, to which a hall and school were added, was opened in 1914. The Glen Huntly Road tram was extended to Grange Road in 1913. About 1 km west in Caulfield there is the Glen Huntly tram depot (1924).

Glen Huntly is west of the swamp and heath lands that formed much of the Caulfield/Carnegie area. By the end of the 1920s its residential settlement and the formation of the shopping strip were complete.

The strip shopping centre along the Glen Huntly Road tramline, either side of the railway crossing, is an active area with several buildings surviving in substantially original form. Many residential subdivisions were of generous dimensions, being approved during Caulfield council's preoccupation with town planning in the 1920s. The sites were recycled for home units and flats during the 1960s and later.

Glen Huntly's census populations have been: 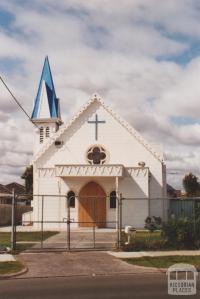