Gobur, a farming locality and village, is 97 km north-east of Melbourne and 26 km north of Alexandra. The name comes from Gobur Creek and the Gobur pastoral run (c1845) occupied by Henry Godfrey. Gobur is possibly a corruption of an Aboriginal word for kookaburra. Henry Godfrey is commemorated in the name of the creek on which the township was situated.

In 1868 gold was discovered in Godfrey's Creek. The following year, when 650 miners were estimated to be on the goldfield, a primary school was opened. Within another year the township had about 30 buildings, and about 20 buildings served as hotels throughout the mining area. A mining registrar was located in the township along with a post office and police barracks. By 1870 gold mining had passed its peak, but steady outputs continued until the 1880s. Several wooden business premises were lost by fire, and in 1886 only one general store was trading. However, stock grazing added to the local economy and a mechanics' institute hall was opened in 1888.

The Gobur Racing Club was formed in 1886 taking over from the Godfrey's Creek Jockey Club (1869). It continued to conduct races until 1928, which coincided with the period when the farming community was able to go further afield for its entertainment. Gobur was described in 1903 in the Australian handbook:

In 1911 the general store was destroyed by fire, two years after the closure of the Mount Gobur mine. It was not rebuilt. In 1913 the wine saloon's licence ended, although the building continued as a post office until 1972 and as a residence. The school closed in 1947 and the hall continued to be used occasionally. In 1969 the Wesleyan church (1869) was used for a centenary celebration. The cemetery and recreation reserve can be seen by observant passers-by. 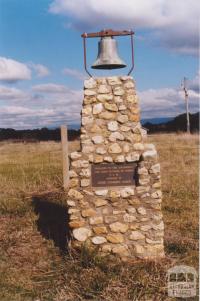