Glenthompson is a small rural town in western Victoria, situated on the Glenelg Highway 48 km north-east of Hamilton and 18 km east of Dunkeld. It is set in hilly to undulating country.

Pastoral settlement in the Glenthompson area began in 1848, and the original pastoral run was subdivided in 1853. One of the resulting portions was the Glenronald property, which may account for the first syllable of the name Glenthompson. The second part of the name is thought to have come from a surveyor or early land owner named Thompson.

A school was opened in 1868, shortly after the first farm selections. In 1877 the railway line was opened from Dunkeld to Hamilton, passing through Glenthompson. This stimulated the growth of Glenthompson, at the expense of Strathmore 5 km westwards, which the line missed. Strathmore had been a minor district centre with a hotel, store and school (1871-1917).

Presbyterian and Catholic churches were opened at Glenthompson in 1870 and 1871. During the early 1900s numerous farms were subdivided from large pastoral properties and a brickworks was opened in 1901 about 20 km from the town. The proprietors were the Thompson brothers, apparently unrelated to the previous naming of the village. In 1903 Glenthompson was described in the Australian handbook:

In 1902 the school was rebuilt with a steepled structure, and a mechanics’ institute was opened. A Methodist church was also opened, and enlarged Catholic, Anglican and Presbyterian churches were built during 1904-15. The brickworks were transferred to a clay pit near the township. The Glenronald estate was subdivided for soldier settlement after World War I and more extensive soldier settlement occurred during the 1950s. A large memorial hall was built in 1955 in the town’s memorial reserve, and a reservoir for town water was completed in about 1954.

Glenthompson has a hotel, shops, Anglican, Catholic and Uniting churches, a recreation reserve, a swimming pool, a public hall and a school which is a campus of Dunkeld consolidated. The brickworks are east of the town and continue to produce a heritage range of solid pressed clay brick. The brickworks is open to tourists and features brick presses dating to 1940.

Glenthompson’s census populations have been:

Kathleen Dickie, Her notes and writings on Glenthompson and its people, 1997 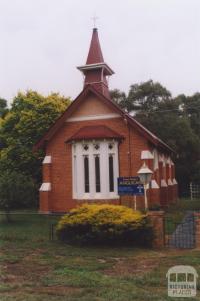