Greenvale is a residential suburb on the outskirts of metropolitan Melbourne. It is situated between Bulla and Craigieburn and is 23 km north-west of central Melbourne.

On its west there is the Moonee Ponds Creek, flowing in an arc around the historic Woodlands Estate (1843) on Gellibrand Hill. The centrepiece is the heritage listed Woodlands homestead (1843), set in Woodlands Historic Park. The park includes heritage listed farmhouse ruins and a Koorie cemetery. The Yuroke Creek and several tributary headwaters flow through Greenvale and enter the Moonee Ponds Creek further south at Broadmeadows. Immediately north of the Woodlands Estate is Oaklands Junction, home of the Oaklands Hunt Club. The area has several stud properties and a large quarry.

The Woodlands site is next to the former Greenvale elderly persons' hospital, originally the Greenvale Sanitarium for Consumptives (1905). The site was chosen for its elevation above sea level, being described as wooded uplands. Consisting of 121 hectares it had landscaped grounds, a fruit and vegetable garden, and was intended mainly for patients in reduced circumstances. Among the numerous buildings on the site there is the modernist ward and hall (1950) designed by the noted architect, Percy Everett.

Greenvale's better quality land attracted sufficient settlers for a school to be opened in 1868. The school, along with a Primitive Methodist church (1869) and recreation reserve, constituted the district's centre. The area was a rural community until the late 1980s, although the building of a domestic water reservoir on the Yuroke Creek's tributaries in 1971 signalled the approach of suburbanisation.

Most of Greenvale between Woodlands Historic Park and the reservoir is subdivided for residential living. Subdivisions began in 1972. A larger primary school (1988) is more centrally located than the original site which became a Seventh Day Adventist church. There is a shopping centre and numerous reserves, several along drainage reserves. There is also a park on the edge of the reservoir.

Greenvale's housing blocks were mostly 0.5 to 5 hectares, and the houses correspondingly large. There is a wide range of styles, from Tudor to Californian bungalow. One house has 30 Grecian columns. After the initial appeal of large blocks, smaller ones of 0.2 hectares have had an upwards price movement.

Greenvale has three distinct living areas. The early village, including Methodist church and recreation area, mostly rural, is between Woodlands and Mickleham Road. The first modern suburb, with large house blocks, is east of Mickleham Road. Thirdly, there is the smaller-block suburb adjacent to the reservoir, north of Somerton Road. Some housing development was delayed in 2010 after the discovery of the critically endangered golden sun moth.

Greenvale Village shopping centre (1988) and the school (664 pupils, 2014) are in the first suburb. Kolbe Catholic college (2006) is in the smaller-block suburb, sharing its catchment with Roxburgh Park. This suburb, still in the course of development, is on the slopes of Aitken Hill (Mount Yuroke), a volcanic cone of elevation 265 metres. The cone, named after the pioneer pastoralist John Aitken, is flanked by a public parkland. The area around Aitken Hill is also known as Greenvale Lakes, which merges north to the suburb of Craigieburn.

Greenvale's census populations have been:

Greenvale has a significant number of residents of Italian origin. At the 2011 census 25.1% claimed Italian ancestry. 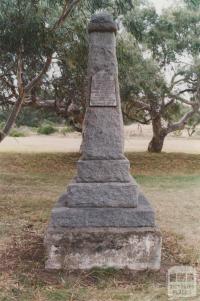