Hastings, a town on the eastern side of the Mornington Peninsula, is 58 km south-east of Melbourne. It has a harbour on Western Port Bay, opposite French Island.

In 1845 Mrs Martha King took up the Bunguyan pastoral run in the Hastings district and is considered to be the first white settler. Mrs King, a widow, had emigrated to Port Phillip in 1840. Her homestead site in Tyabb is now the Banguyan Reserve off the Frankston-Flinders Road.

The first township to be surveyed and named was Tyabb, now recorded as Old Tyabb township to the north of the Hastings primary school. Old Tyabb’s position at the head of the Hastings Bight was not quite right, as already there was a fishing settlement about 2 km south, at a place favoured by deeper water. The place, known as Kings Creek, was renamed Hastings in about 1860, probably after the sea port of Hastings in Sussex, England.

By the mid-1860s an Anglican church was established in the old Tyabb township and in 1868 a school was established. The first jetty was built in 1865. The small rural seaside township was at the end of an area of orchards and farming centred on Somerville and Tyabb.

During the 1880s the entrance to Port Phillip Bay was fortified against naval invasion, and additional measures were put in place to forestall the alternative of invasion from Western Port Bay. A railway line was opened, passing by a military camp at Langwarrin and going on through Hastings to Crib Point (1889). A voluntary defence group was formed at Hastings in 1890 commanded by Captain David Ham. Armed with 40-pounder guns, the defence group was known as the ‘ham and beef battery’. The defence measures were of secondary importance to Hastings, as the railway connection gave the township everyday transport. In 1903 Hastings was described in the Australian handbook:

Hastings’ population steadily grew from about 390 people in 1901 to about 1000 people in 1950. It became a local service centre for the surrounding rural areas and for the naval base at HMAS Cerberus/Crib Point.

By the 1950s the Hastings district was large enough to effectively voice concern about the need for separation from the rapidly urbanising Frankston, and on 18 October 1960, Hastings shire was formed by severance from Frankston shire. There was also nascent ambition for the industrial potential of Hastings when a local councillor took up the cause of using the deep water channel for a new port. (The potential harbour had been identified in 1928 by a Royal Commission on Victorian Outer Ports, concluding that Long Island and Crib Point were protected from adverse weather conditions and were eminently suitable for harbour works.)

The Hastings shire council instigated the formation of the Westernport Development Council, coinciding with reawakened interest by British Petroleum (BP) in refining and/or petroleum storage at Hastings. The State Government constructed a wharf at Crib Point for a BP refinery. The discovery of natural gas and oil in Bass Strait in 1966 strengthened Hastings’ role for treatment and distribution. John Lysaght, BHP and Cresco Fertilisers began industrial developments at Long Island. By 1970 the expansion of Hastings’ commercial centre was well under way, and there was a rush of land subdivisions for housing well in excess of demand.

The first evidence of possible industrial pollution came with an oil spill in mid-1966, and by the early 1970s a conservation lobby had formed. In 1971 the Save Western Port Coalition published The Shame of Western Port: speculator’s dream...environmental nightmare. An unexpected complication was the ineffective flushing of pollutants from Western Port Bay by tidal action, because a tidal inrush overtakes the weak ebb tide before it reaches Bass Strait. The upper reaches of the bay were later recognised as a zoological site of international significance.

The sequence of industrial projects was the BP refinery at Crib Point (1966), the Esso/BHP gas and oil storage plant at Long Island, and the Lysaght Steel works at old Tyabb (1972).

Despite potential environmental destruction stopping some of the grander development plans for Hastings, the township experienced rapid growth during the 1970s, plateauing at around 5500 people. The stabilisation of population provided an opportunity for consolidating town amenities, particularly the landscaping of the foreshore: a foreshore reserve runs along nearly all of the Hastings Bight down to Crib Point, and it contains tennis, bowling and swimming facilities. The Western Port Marina accommodates 600 boats.

Hastings has Western Port secondary college (1974), two State primary schools, a Catholic primary school (1919), a hospital, a comprehensive main street shopping centre, several neighbourhood reserves and two caravan parks. A Kmart discount department store was added in 2006. Marine Parade, near the town jetty, has several civic buildings, including the former Hastings shire offices and the historical society’s museum. There is a statue of the champion league footballer, John Coleman, near the shire offices. Coleman played for the Hastings football club before going to Essendon in 1949.

Hastings shire had an area of 305 sq km. When it was amalgamated with Flinders and Mornington shires and part of Frankston city on 15 December 1994, there were substantial urban areas in Crib Point and Somerville, and about 2000 people in Tyabb and Somers. All told the urban population comprised about 67% of the shire’s 29,800 people in 1991. The newly formed shire, Mornington Peninsula, maintains a district office at Hastings.

The Lysaght steel works became Blue Scope Steel (owned by BHP) in 2002. In 2011 the rising exchange rate of the Australian dollar pushed Blue Scope into unprofitability in its steel exports, and it announced the reduction of its Hastings plant by 200 employees. Coincidentally in 2012 the Victorian Government formed the Port of Hastings Development Authority for the planning of a large shipping container terminal at Hastings harbour. The terminal would be linked by rail to Dandenong and Lyndhurst. The terminal would transform Hastings’ turnover of 200 vessels per year for import and export of steel, fuel and gas. Environmental planning for the future port began in 2014.

In January 2015 a fast moving 131-hectare fire, which was centred in Jacks Beach Reserve and driven by extreme heat and winds, destroyed sheds and back fences along Warranqite Crescent, Hastings. The fire spread to Warringine Park close to houses and forced residents to evacuate.

Hastings census populations have been:

Weston Bate, Fay Marles, Dilemma at Westernport: a case study in land use conflicts and the growth of the planning imperative, Sorrett Publishing, 1978

Bruce Bennett, The Hastings fishermen and the history of fishing at Hastings on Western Port, Hawthorn, 2004

Bruce Bennett, The ham and beef battery: a history of the defence of Western Port and the 40 pounders at Hastings, Hawthorn, 2004 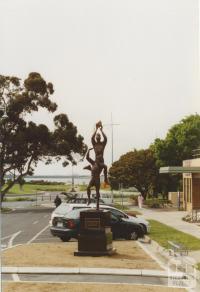