Hawksburn, a residential area 5 km south-east of Melbourne, is situated between South Yarra and Prahran. It was named after Hawksburn House (situated near where the railway station was later built), which was so named when its owner saw a hawk near a stream which he likened to a Scottish burn.

Unlike neighbouring Prahran, Hawksburn was not provided with rail transport until the Gippsland railway was connected between South Yarra and Caulfield in 1879. Consequently it was an outlying area of Prahran, and its first main public institution was the Prahran primary school at the corner of Malvern and Surrey Roads, 1875, later called Prahran North (1888) and Hawksburn (1906). The area's population in 1911 was 1551.

Hawksburn's shopping street is Malvern Road (the extension of Commercial Road, Prahran), along which a tram service was opened in 1915. The shopping centre has adjusted from everyday service retailers to a mixture of specialist retailers with convenient kerbside parking, which contrasts with crowded Chapel Street, Prahran.

Hawksburn's land is elevated above Prahran's and it attracted a number of large residences whose owners favoured such sites because of their superior drainage. However, there are also more modest houses, and immediately west of the school is the Horace Petty Estate of highrise Housing Commission flats (c1967).

The school's attendance fell from about 1000 to 700 in 1965, but the flats boosted attendances and enrolled children from European backgrounds. Up to 70 percent of children came from families born overseas. In later years children from South Asian backgrounds substituted for those from European backgrounds until the school closed in 1993. Another striking change was the attendances at St Martin's Church of England at the corner of Cromwell Road and Wilson Street. Opened in 1883, it had attendances of 500 in 1890 and over 200 Sunday School pupils from then until 1922. A large parish hall was built in 1927. In the 1980s the weekly service attendance was around 50. The church had been doubly affected by the general decline in religious observance and the change in the ethnic composition of its neighbourhood. 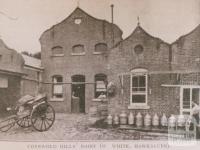