Hexham is a rural village in western Victoria, situated on the Hamilton Highway, 47 km north-east of Warrnambool and 15 km north-west of Mortlake.

Hexham was surveyed as a settlement only two years after Mortlake. It was situated on an important regional route which had a ford where the Hopkins River was crossed.

Pastoral occupation in the Mortlake-Hexham area began in 1839 with the Mount Shadwell pastoral run. In 1848 the western part of the run was severed to form Hexham Park. By then there was the Woolshed Inn at the ford, possibly as early as 1842. Its successor, the former Hexham Hotel, was built in 1854.

In 1853 Mortlake was surveyed, and in 1855 Hexham was surveyed for township lots. A post office and a school were opened in 1857 and 1858. In common with much of the Western District, the dominant religious group was Presbyterian, and a bluestone church was constructed in 1862. It was replaced with another building with a crenellated tower in 1864. Other amenities included a racecourse (1858-1942) and a timber bridge over the Hopkins River (1858).

After the mid-1860s Mortlake drew ahead of Hexham, and the only notable additions to Hexham were an Anglican church (1866-1988) and a temperance hall/mechanics’ institute (1876). In 1903 Hexham was described in the Australian handbook:

Hexham’s pastoral plains have been prone to grass fires, with a notable occurrence in 1940. After World War II the Hexham Park, Mount Shadwell and Merrang estates were reduced by subdivision for soldier-settlement farms. (Merrang, 1839, is south-west of Hexham).

Hexham has a public hall and houses scattered along its street layout. The school closed in 1981. The former hotel (1863) is on the Register of the National Estate. Merrang homestead (1859, 1875) is on the Australian and Victorian historic building registers, and is locally regarded as the pre-eminent pastoral homestead among those surviving. The temperance hall (1876) is also heritage listed. There are avenues of honour for both World Wars, the earlier one (1921) along the Princes Highway being an impressive avenue of cypress. The primary school closed in 1981 and in 1985 the Hexham Football Club was disbanded.

In 2005 the Hexham Strategic Plan targeted the only business in town – Hexham Stockfeeds – a 20 silo grain storage and processing industry that was centrally located on 0.8 hectares bounded by Roger Street, Adam Street and Farie Street. In 2006-07 Moyne Council increased regulation on the business to control excessive dust and noise and maintain the village atmosphere.

Hexham’s census populations have been: 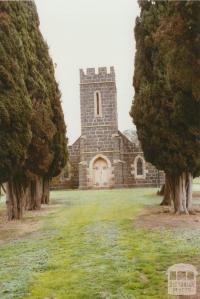