The town of Heyfield is on the Thomson River, 36 km north-east of Traralgon and 196 km east of Melbourne.

The Braiakaulung tribe inhabited the area, hunting on the open plains and in lagoons along the river. Trees scarred by the cutting of bark canoes can be found still.

In 1840 explorers McMillan and Strzelecki both crossed the Thomson River near present Heyfield. A cairn, constructed in 1927, commemorates their journeys. Heyfield pastoral run was occupied in 1841, supposedly named for the tall waving grass covering the plain. A small settlement, known as Heyfield Bridge, soon sprang up on the northern side of the river. In the early 1860s gold was discovered in the Great Dividing Range, to the west, and a route to the goldfields passed through Heyfield, stimulating considerable growth. The township was surveyed in 1864. Two hotels commenced business in the early 1860s. A school was constructed in 1871 and in 1874 the Anglican and Methodist congregations built churches. A sawmill operated in the 1860s, and by the 1870s, the town had a tannery, a flour mill and a brickworks.

A colourful event in Heyfield’s past was the battle of the bridge, fought in 1878. James Tyson, then owner of Heyfield run, closed the bridge over the Thomson River, built in 1876, claiming the south approach was on his land. After three weeks a confrontation occurred when a bullock team pulled the locked gates down. Tyson acquired Heyfield run in 1866 and bullocks fattened at Heyfield gained a high reputation at Melbourne markets. On his death in 1898, Heyfield run was divided into 114 farms which were used for dairying and cropping. A loop rail line from Traralgon reached Heyfield in 1883 and was extended to Maffra in 1887. Heyfield’s business centre gradually moved towards the railway station. Increased population spurred further development and more blocks were subdivided in the town after 1900. The Australian handbook described a thriving town in 1903:

Through the early part of the twentieth century, Heyfield was a service centre for the surrounding farming and pastoral district. The Heyfield Butter Factory Company (1891) built a new factory in 1922 and cattle sales were held fortnightly.

In the late 1940s the State Rivers and Water Supply Commission began works in the area, employing several hundred workers to construct channels and drains for irrigation, as well as raising the wall of the weir at Glenmaggie. Many displaced persons worked on the scheme, and after completion in 1960 about 60 families remained in the area. From the 1950s soldier settlers moved onto the newly created irrigation farms south of Heyfield. In 1960 the butter factory joined South Eastern Milk Products Limited, but in 1974 it was closed after being acquired by Murray Goulburn Co-operative.

However, an even greater boost to the town’s economy came from the development of a sawmilling industry. The logging of forests burnt in the 1939 bushfires was completed, so in 1950 eight companies were granted licences to extract mountain ash from the Macalister Forest District, in the Great Dividing Range north of Heyfield. Seven sawmills were established in Heyfield and another commenced operations at Licola, 53 km to the north. A large number of new homes were built for the influx of workers, which also stimulated the establishment of many new businesses.

By 1958 there were concerns over diminishing reserves of millable timber so a joint company, Heyfield Sawmillers Logging Company, was formed to co-ordinate operations. Allocations of logs were gradually reduced and sawmills have amalgamated or closed over the years. In 2011 there were two mills, a giant Gunns operation (sold in 2012 to the Australian Sustainable Hardwoods consortium) and the local Canningvale mill.

Heyfield is a substantial country town, with a hall, hospital, primary school (176 pupils, 2014), Catholic school, community resource centre, police station, churches, two hotels and sizable shopping centre. Numerous social and sporting clubs function, including the Heyfield Racing Club. Heyfield serves the surrounding farming district and attracts commuters working in other areas. The railway closed in 1987. In 2013 widespread bushfires threatened the Heyfield district and an incident control centre was established at Heyfield. The year before, floodwater had threatened the same area.

Census populations for Heyfield have been: 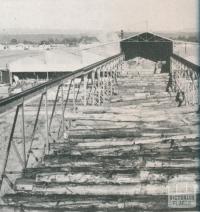 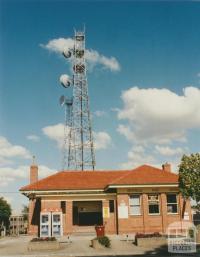 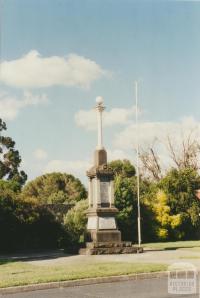