Indented Head is a coastal township on the end of Bellarine Peninsula facing eastwards on to Port Phillip Bay. It is between Portarlington and St Leonards, and is 43 km south-west across the bay from Melbourne.

Indented Head was named by Captain Matthew Flinders when exploring Port Phillip Bay in the ship 'Investigator' (1802). Landing on the east side of the bay he ascended Arthurs Seat and observed on the opposite side of the bay the Bellarine Peninsula with the indented coastline which he named Indented Head. The place was again noted in 1803 when Lieutenant Tuckey explored the bay. He was a member of the contingent which unsuccessfully settled at Sorrento. (It was from this contingent that the convict, William Buckley, absconded, and he crossed to the Bellarine Peninsula.)

On 29 May 1835, John Batman in the 'Rebecca' anchored near Indented Head, prior to negotiating his 'land treaty' with the local Aborigines. After the treaty documents were signed, Batman landed a party of occupation at Indented Head (9 June) and left it under the supervision of James Gumm. On 6 July, Buckley, after 32 years in the wilderness, entered the party's camp and rejoined colonial society.

Until the 1850s several pastoralists occupied the Indented Head area. A Road Board for the Portarlington district was enlarged eastwards on 29 October 1860, and renamed the Indented Head Road District. Its area held about 3300 people. At about the same time the Indented Head Farmers' Association was formed, mainly with the objective of maintaining good prices for local wheat through import duties. The Association later influenced land legislation, lobbied for grazing commons and animal pounds and conducted an annual ploughing contest. It also pressed for services for emerging towns on the Bellarine peninsula.

Indented Head, however, was the least of the coastal townships.

There was foreshore camping there at least as early as the 1920s, and in 1951 the Victorian municipal directory described it as a seaside resort with a store, telegraph office, the Batman Park camping area and two private camping areas. In 1988, after decades of camping, Indented Head was described as having three shops and a cluster of houses.

The foreshore is broken into reserves and camping areas. Out from the Batman Park camping area the 'Ozone' steel paddle steamer is sunk as a breakwater (1925). The actual indented head has a jetty, boat ramp and a memorial to Flinders and Batman. To its north there is a yacht club and a boat club.

The census populations of Indented Head have been:

At the 2011 census, the median age of residents was 52 years (Australia, 37 years). On census night 39% of the dwellings were occupied, indicating that about half were probably holiday homes. 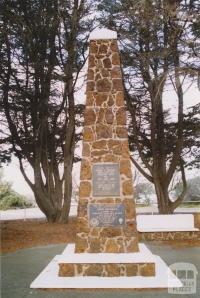