Ivanhoe is a residential suburb 9 km north-east of central Melbourne, south of Heidelberg. The land occupied by Ivanhoe was one of several portions near the Warringal (later Heidelberg) village surveyed in 1837. Sales occurred the following year and, the Ivanhoe portion was considered to be of unusual fertility and landscape appeal. It had Darebin Creek on the west and the Yarra River on the south. By the 1850s there was an Ivanhoe village, a name derived from Sir William Scott's novel, and used from 1853. A school was opened in the Anglican church.

During the 1850s smaller farms were taken up and by the next decade there were two hotels, market gardens, orchards, an elementary racecourse and ‘gentlemen's villas’. A state primary school which replaced the one in the Anglican church, was opened in 1881. The Australian handbook 1903, described Ivanhoe:

Between 1910 and 1930 Ivanhoe underwent residential development. From being a pretty township with handsome villas, a church school, a golf links and a population of 2013 in 1913, it had 5016 persons in 1921 and 7701 persons in 1933. The Victorian municipal directory described it as having six churches, boys’ and girls’ grammar schools, a baby health centre, a fire brigade, a picture theatre, a horticultural society and a swimming basin.

During the 1920s the Ivanhoe Girls' Grammar School (1903) and the Boys' Grammar School (1915) had growing enrolments. Another primary school in Ivanhoe East was opened in 1930. In 1937 the council offices of Heidelberg city were transferred from the old Heidelberg village to a new art deco civic centre in Upper Heidelberg Road, Ivanhoe. The move acknowledged that Ivanhoe's shopping and commercial area was the more prominent of the two. North of the town hall there is A.V. Jennings’ first housing estate, Beaumont, along Melcombe Road (1938). Ivanhoe gained direct access to suburbs south of the Yarra River when the Burke Road Bridge was opened in 1926.

The areas of Ivanhoe which are distant from the railway station and shopping centre completed their residential development in the postwar years. Ivanhoe West, adjoining the Darebin Creek, has Housing Commission dwellings, a Catholic school (1951) and a small shopping area. The Bellfield primary school was opened in 1951. Ivanhoe East (separate entry), adjoining the Yarra River, is famed for the Boulevard which overlooks the public golf course and Yarra Valley. Each Christmas residents decorate their houses and gardens and the display attracts many onlookers. There is an active strip shopping centre in Lower Heidelberg Road near the A.V. Jennings Beauview estate (1941).

Ivanhoe central has maintained its retailing dominance, with a combination of strip shopping and the Ivanhoe Plaza. There is a bowling club and tennis court near the shopping centre. A swimming pool is north of the shopping area. There are Anglican, Baptist and Uniting churches near the town centre, and a Catholic church and school are to the south. Ivanhoe primary school had 558 pupils in 2014.

Ivanhoe is mainly a middle class area, evidenced by its sporting clubs and, perhaps best of all, by a reading circle which ran for over 50 years.

Ivanhoe’s census populations have been: 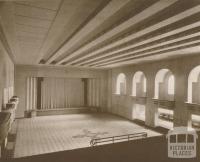 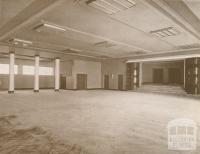 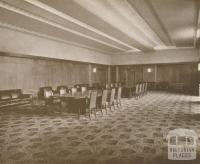 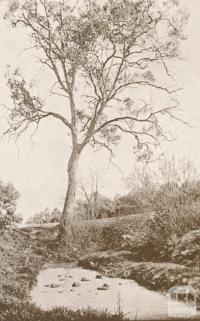 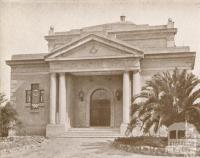 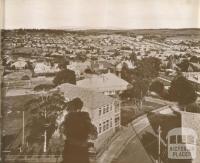 Ivanhoe, as seen from the clock tower of the new Town Hall, 1937 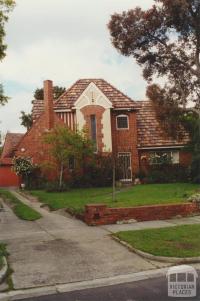