Katunga is a rural village in the Murray Valley irrigation area in northern Victoria. It is 10 km north of Numurkah.

Katunga was originally the name of a district parish, and was given by a government surveyor, Alfred Leahy, in 1875. It is thought that Katunga was the name of an Aborigine.

The Katunga locality became recognised when the Katunga North school was opened in 1880. A Wesleyan church was opened in the vicinity in 1883. In 1888 the railway was extended through Katunga from Numurkah to Strathmerton, and a small township grew around the station and siding. Within a few years there were a store, a grain store, sheep and cattle yards and a hotel. An Anglican church was opened in 1889. A football club was formed in 1892 and an annual athletics meeting was held. The railway siding often held over 100,000 bags of wheat for shipment.

In 1947 irrigation works from the Yarrawonga channel were begun in Katunga and soldier settlers took up farms of between 16 ha (orchards) and 49 ha (dairy farms). Most former wheat growers whose farms were acquired for subdivision left the district. The district's population more than tripled by 1954. A second primary school, Katunga, was opened in 1952, and the name of the first school was changed from Katunga North to Katunga South.

The irrigated farms required additional drainage works when excessive rainfall occurred. Many orchards were converted to dairy farms, and silos at the railway siding continue to be used for wheat. Barley, oats and sunflower seed are also grown. The Monichino winery (1977) is on a former orchard.

Katunga has a general store, an engineering workshop, schools at Katunga (95 pupils, 2014) and Katunga South (24 pupils, 2014), a well appointed recreation reserve with tennis courts and recreation rooms, a community centre and a lucerne mill.

Katunga's census populations have been:

At the 2011 census dairy farming accounted for 25.1% of employment, other farming 3.4% and dairy-product manufacturing 6.1%. 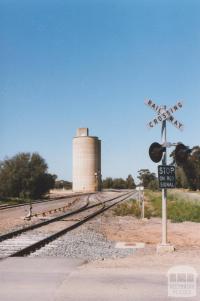