Keilor East is a residential suburb 12 km north-west of central Melbourne. It is just beyond Essendon West and Niddrie, where the tram line to Airport West ends.

The area was subdivided as the City View Estate in 1955, and is situated on an elevated area that overlooks Essendon. Development followed about ten years after the subdivision, the primary school opening in 1963 and the high school in 1969. Both were named Keilor Heights. Essendon Grammar School acquired land for expansion to its future catchment area.

Keilor East’s north boundary is the Calder Freeway and its southern boundary adjoins Avondale Heights. There are three neighbourhood shopping areas in Dinah Parade, Milleara Mall near Avondale Heights and Centreway near the Essendon Grammar campus. There are Catholic and Greek Orthodox churches and a Catholic primary school. Linear parks along Steele Creek and neighbourhood reserves are numerous, but the most spectacular reserve is Brimbank Park in horseshoe bends of the Maribyrnong River, where Keilor East joins the old Keilor township.

Brimbank Park is one of six metropolitan parks chosen for development by the Melbourne and Metropolitan Board of Works in 1974. The park contains steep treeless land, cypress and pine planting from previous pastoral settlement and the Dodd homestead. (Dodd settled in Keilor in 1850, and was related to the Delahey family. Delahey is a suburb west of Keilor). The park has extensive cycling/walking tracks, and several viewing points. It is joined to the Green Gully Reserve via Taylors Creek.

Keilor East contains the Keilor cemetery (1857), a source of considerable Keilor family history. It was also the home of a bluestone quarry (1940s-70s) on the west side of Steele Creek. During the 1990s a proposal to use the quarry hole as a toxic waste dump was defeated, and Vic Urban had it filled for a residential development site. Valley Lake, off Rachelle Street, is a remnant of the quarry hole.

Until 1994 Keilor East extended to Keilor city’s municipal boundary, Hoffmans Road, West Essendon. The Keilor East RSL is there, although the address is now Essendon West. In 1994, when council boundaries were restructured, the Albion to Jacana railway line was chosen as the boundary between Moonee Valley and Brimbank councils, dividing the suburb in two. The western ring road parallel to the railway is a further division.

Keilor East has substantial Italian and Catholic populations. Its census populations have been:

Christine Laskowski, Steele Creek and the Lady of the Lake, 2013 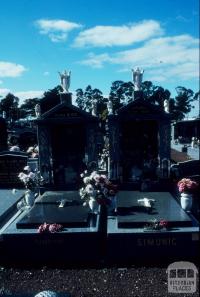