Kiata is a rural locality on the Western Highway and railway line from Horsham, 13 km east of Nhill in the Mallee region, north-west Victoria. It is thought that the name is derived from an Aboriginal word describing summer heat.

During the early 1870s much of the locality was taken up for farm selections. The Kiata township was surveyed in 1876. Schools were opened at Kiata West (1879-1947) and at Kiata East (1881-1907). An Anglican church was opened at Kiata in 1884, and it was used for the first Kiata school in 1886. There are also references to early Methodist churches, and a Lutheran congregation developed there, in common with several nearby settlements of Germanic origin from the Hamilton area and from South Australia. The Lutherans acquired a Wesleyan church at Kiata East in 1907, using it for 40 years, when it was closed.

The railway line was opened in 1887, and later there was a hotel, a store and a blacksmith. Most farms grew wheat. In 1903 Kiata was described in the Australian handbook:

Kiata is about 10 km north of the Little Desert National Park (1969). In 1955 the small Kiata Lowan Sanctuary, 6 km southwards, was established for protecting the mound-building mallee fowl. The sanctuary adjoins the National Park (35,300 ha).

Kiata has the Little Desert Hotel, a silo and an oval. The school closed in 1968.

Kiata's census populations have been: 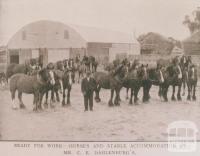