Knox city began as a shire created on 10 November 1963, by the severance of the western part of the Fern Tree Gully shire. Knox shire's western boundary was Waverley city, and its centre point was about 25 km east of Melbourne. Knox was proclaimed a city on 4 July 1969.

It was named after Sir George Knox, Fern Tree Gully shire councillor and member of the State lower house representing Upper Yarra and Scoresby (1927-60). He was elected as a shire councillor in 1923.

When Victoria's municipalities were amalgamated in 1994 Knox had part of Churchill Park removed and parts of Upper Ferntree Gully and Lysterfield were added. Knox city’s area is 118 sq km. Its eastern boundary is the Dandenong Creek, from Wantirna to Rowville. A substantial part of the boundary wetland is a route for the Eastlink Tollway (2008). The creek also forms Knox’s northern boundary to as far east as The Basin in the Dandenong Ranges. The eastern boundary runs south through Lysterfield Park where it meets Casey city. Knox city’s transport corridors are arterial roads – Wellington Road, Burwood Highway and Mountain Highway – except in the north-east where the Box Hill to Ferntree Gully railway line serves the older suburbs.

During the 1960s Knox had both rural and urban/manufacturing components. Scoresby and Rowville were mainly rural and Bayswater had substantial manufacturing. Between 1964 and 1980 the number of manufacturing jobs in Knox grew from 1730 to 7040. The population grew from about 15,000 to 89,000 as the rural parts were built on for housing. On Burwood Highway near the centre of the municipality there are the civic offices and a large regional shopping centre, Knox City (1977). Classified as a super-regional centre, Knox City has a department store, three discount department stores, over 300 other outlets and a cinema complex. Total lettable space is nearly 110,000 sq metres.

The census populations of Knox municipality have been:

Michael Jones, Prolific in God's gifts: a social history of Knox and the Dandenongs, Allen and Unwin, 1983

A.P. Winzenried, The hills of home: a bicentennial history of the Shire of Sherbrooke, Belgrave, 1988 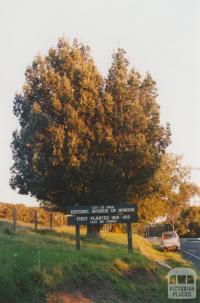