Lismore, a rural town on the Hamilton Highway in western Victoria, is 35 km north-east of Camperdown. Its settlement arose from the district’s first pastoralist, John Brown, who in 1840 camped at the creek which runs through Lismore while a bullock dray was repaired. The creek is known as Brown’s Water Holes.

Lismore was surveyed in 1852 and given its name the following year. It is thought that it was named after Lismore in County Waterford, Ireland. The main, and almost sole, building was the White Swan hotel (demolished in 1914). Lismore was little more than a village until the pastoral properties around it were subdivided for closer settlement farms, mainly after World Wars I and II.

A store was opened in 1864, a Presbyterian church in 1865 and a school in 1867. A few cottages and stores were added in coming decades. In 1903 Lismore was described in the Australian handbook:

When John Brown occupied the first pastoral run it was known as the Mount Elephant estate, named after the volcanic cone 13 km west of Lismore. It was divided into six pastoral runs, including Gala (5 km north of Lismore), Titanga (4 km north-west of Lismore), Larra (south-west of Lismore) and Gnarput (east of Lismore). Parts of Gnarput and Gala were subdivided for closer settlement during 1905-08 and large portions of all estates were subdivided for soldier settlement. Some homesteads were subsequently demolished, but Larra and Titanga remain and are registered historic buildings. The impressive Larra stables are also registered.

Methodist and Anglican churches were opened in 1912, a railway line from Geelong to Ararat via Lismore was opened in 1913, servicing a livestock saleyard. During 1925-30 there were a private hospital and a bush nursing hospital, leading to the Lismore and District Hospital in 1965.

During these periods of growth, the township of Derrinallum, 10 km westwards, also developed. Its population has approximated Lismore’s drawing commercial growth from Lismore and securing the district’s high school (1962). Lismore, nevertheless, has sustained the wider range of community bodies, including a newspaper (1910-66), a golf club and a swimming pool (1964). Despite extensive tree planting in and around Lismore, the area is prone to grass fires during droughts. Bad outbreaks occurred in 1944 and 1977.

Lismore has a shopping centre, a hotel, a hospital, a public hall, Anglican, Catholic and Presbyterian churches, a caravan park and a range of sporting facilities with a large public reserve. In 1998 the school had 84 pupils and in 2014 it had 27.

Lismore’s census populations have been: 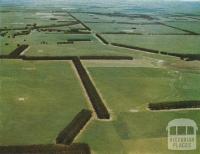