Longerenong, a farm district and site of an agricultural college in the Wimmera region, is 13 km north-east of Horsham.

In 1848 William Taylor became the proprietor of a pastoral run, being one of two formed from an earlier run which he and Dugald McPherson took up in 1844. Taylor’s portion was named Longerenong, thought to be derived from an Aboriginal word referring to the parting of the waters. Taylor and McPherson’s run had been situated where the Wimmera River divides, the second stream becoming the Yarriambiack Creek. Taylor disposed of the Longerenong run to the brothers Charles and Samuel Wilson in 1856, and in 1862 Samuel built the Longerenong homestead. (He was later knighted, and financed the construction of Wilson Hall at the University of Melbourne).

During the 1870s some of the pastoral run was occupied for farm selections, and in 1877 a school was opened for local children. It lasted for only two years. Longerenong’s more enduring contribution to education began when the Dookie agricultural college was unable to accommodate all potential pupils, and the Victorian Council of Agricultural Education opened a school site at Longerenong. Occupying 966 hectares, the site was crab-holey land but with deep loam. A college building was opened in 1889.

The college has been the main population of Longerenong. A primary school was attached to it during 1928-35 and 1941-87. The college developed from a farm boarding school to a three year diploma course (1949) to dual short term and degree courses (1986). It became a campus of the University of Melbourne in 1993 and a site for Wimmera Machinery field days. In 2006 Work Co Limited took over the college.

Longerenong homestead in Burnt Clay Road, 10 km east of the college, is on the Victorian Heritage Register.

Longerenong’s census populations have been:

David Maunders and Donella Jaggs, An asset to the state: Longerenong Agricultural College 1889-1989, Victorian College of Agriculture and Horticulture, 1989 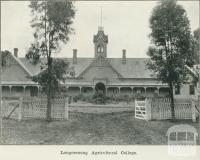