Manifold Heights is a residential suburb 2.5 km north-west of central Geelong, lying between Herne Hill and Geelong West. Its west-east width is 600 metres, from Minerva Street to Shannon Avenue. It was named after Manifolds’ vineyards, reaching between the two thoroughfares, immediately east of the cemetery in Herne Hill. The vineyards were owned by the prominent Western District pastoralists, John and Peter Manifold.

Residential settlement in Manifold Heights dates from the 1920s. A Baptist church opened in Shannon Avenue in 1923 and the State primary school three years later. The Sands and McDougall directory (1933) recorded several shops along Shannon Avenue near the Baptist church, and Volum Street beside the church was largely built on. Bostock Street in the west, where a Spanish-Mission style Catholic church was built in 1932, had only eight houses.

Manifold Heights has two civic centres. On its west there is the Peter Lowe Reserve (Lowe was a local mayor, 1963-64), from which streets fan out, joined by concentric streets in an arc. On the west there are the Shannon Avenue shops.

Manifold Heights’ census populations have been: 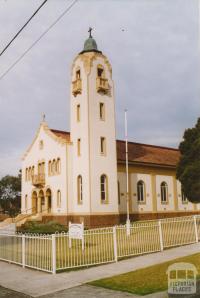