Mount Buffalo, in north-east Victoria, is a tourist resort on a mountainous plateau that stands separately to the west of the Victorian alps. It is 75 km south of Albury-Wodonga and is usually reached by the Ovens Valley, south-east from Wangaratta. The nearest township before the plateau is ascended is Porepunkah.

The first Europeans to see the plateau were Hume and Hovell (1824) who thought that the land form resembled a reclining buffalo when observed from the north-west. They named it Mount Buffalo.

Aboriginal inhabitants had for centuries visited the plateau for summer feasting on the Bogong moth colonies. Until alpine tourists visited Mount Buffalo, mainly as a result of the railway extension to Bright in 1890, the only white visitors were a few mountain cattle drovers. Two families who acted as tour guides and provided elementary accommodation were the Carliles and the Manfields. 'Guide Alice' Manfield became the best known personality among the tour guides.

In 1908 the State government constructed a road from Porepunkah to the centre of the plateau and two years later opened the chalet. A lake was formed by damming a creek, initially for water for a sawmill, but later for scenic purposes, skating and fishing. It was named after the Government's chief road engineer, Carlo Catani.

During the 1920s Mount Buffalo became Victoria's premier ski resort and a venue for alpine motoring trials. The timber chalet, however, suffered from the excesses of rain and snow, and the Victorian Railways assumed responsibility for its upgrading and maintenance after 1924. Mount Buffalo's popularity continued until after World War II for both winter sport and summer vacationing. Skiing gained more supporters from postwar European migrants placed at camps at Bonegilla or who settled in north-east Victoria. In 1964 the Tatra Inn, including motel units and swimming pool, was opened, but further development was frustrated by support for keeping the Mount Buffalo National Park relatively uncommercialised. The postwar years, especially since the 1970s, confirmed Mount Buffalo as a park, and ski development moved to the Bogong High Plains (Falls Creek, Mount Hotham).

The chalet was preserved as an accommodation place, having been transferred to the private sector under a leasehold arrangement since the 1980s. It has been closed since 2007 following extensive bushfires in the Alps that impacted the national park and access to the Chalet. In May 2013, following public consultation, the State government announced plans to develop a day visitor facility at the Chalet, comprising an information centre, activity centre and cafe space. Redevelopment works were to be conducted throughout 2015 with an intention to reopen the chalet in 2016.

There is a camping area beside Lake Catani. Many thousands of day visitors come to the plateau each year for snow sports, walking, rock climbing, horse riding and cross country skiing. The Mount Buffalo plateau is one of eleven national parks placed on the National Heritage List for alpine areas in 2004. The chalet is listed on the Victorian Heritage Register. Numerous maps, booklets and guides on Mount Buffalo have been published since the 1920s. 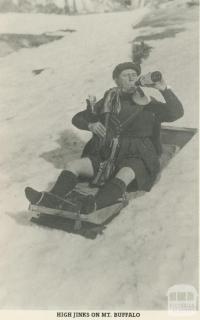 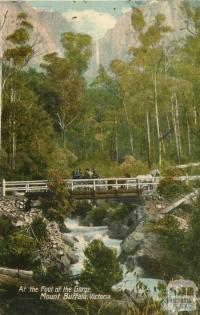 At the foot of the Gorge, Mount Buffalo 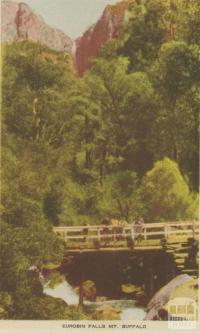 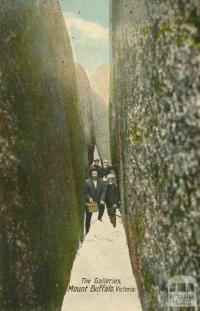