The name Dandenong is thought to be derived from an Aboriginal word meaning high or lofty. The city of Dandenong, 12 km south-west of Mount Dandenong is connected to the ranges by the tributaries of the Dandenong Creek. In 1837 the creek was recorded as ‘Dangynon’, which by 1840 was given its present spelling. The Surveyor-General's office applied the name to the ranges in 1857, in place of the more difficult Corhanwarrabul, Aboriginal for the peak adjacent to Mount Dandenong on which Burke's Lookout is now placed.

The settlement of Mount Dandenong occurred along with Olinda in 1893 when a village settlement comprising ten-acre farms was established for selection. Prior to then the area was the province of timber-getters and a few larger selections. By 1900 the Mount Dandenong area had a post office, store and a school (1897). It became predominantly a fruit-growing district, with increasing tourist and day-tripper traffic.

In common with neighbouring Olinda, Mount Dandenong underwent residential settlement for weekenders and more elaborate buildings after World War I. It gained a reputation for fine gardens. There is a small shopping centre and several restaurants about 2 km from the school (205 pupils, 2014).

Metropolitan Melbourne's television transmission towers are installed on Mount Dandenong. In addition to the view from the mount and the nearby Burke's Lookout, the main tourist attraction is the William Ricketts Sanctuary, noted for the sculptures in its grounds.

The towers overlook Doongalla Forest (part of the Dandenong Ranges National Park) which is in the suburb’s area. A short distance from the towers there is a memorial marking the crash site of the aircraft, Kyeema, in 1938 where all 18 occupants were killed.

The census populations of Mount Dandenong have been:

John Lundy-Clarke, The Dandenong volcano and settlement in its great forest, Mount Dandenong, 1976 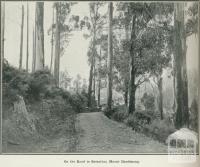 On the road to Sassafras, Mount Dandenong, 1918 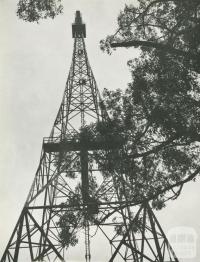 St Michael and All Angels Church of England, Mount Dandenong 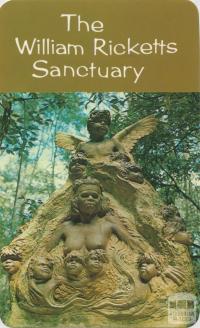