Mount Macedon is a rural and residential locality east of the Mount Macedon summit, 60 km north-west of Melbourne.

The mount was named by the New South Wales Surveyor-General, Thomas Mitchell, on his return journey from Victoria's Western District, 'Australia Felix'. The inspiration for the name was apparently through Phillip II, the ruler of Macedon (359-336BC). (At the same time a name was given to the coastal, Port Phillip, bay which Mitchell saw from the summit.)

In 1861 a railway line was opened along the western foothills of Mount Macedon, connecting the area to Melbourne. Already there had been sparse settlement for gold mining at Middle Gully (near the Macedon railway station) and for timber cutting. The Mount Macedon school was opened in 1857. By 1870 much of the mountain's best timber had been removed, and a Government forestry nursery was opened in 1872 near Middle Gully (later named Macedon, a township adjoining the Mount Macedon locality). During the 1870s Mount Macedon became a summer 'hill station' resort for wealthy Melburnians. Extensive gardens were planted around the new homes, and cleared areas were used for orchards and plant nurseries.

The newspaper proprietor, David Syme, built 'Rosenheim' on 24 hectares in 1869. It was acquired in 1886 for successive Victoria Governors, giving Mount Macedon a cachet equalling Government House in South Yarra until it was sold in 1934. Charles Ryan built 'Derriweit Heights' (1873). He was the father of Ellis Rowan, wildflower painter, grandfather of Maie Casey and grandfather-in-law of Lord Casey, Governor General of Australia, 1965-69. All are buried in the Macedon Cemetery.

Guest houses were also built at Mount Macedon, and the mountain range drew excursionists and day trippers. Several houses took in guests during the 1920s-30s. The Mount Macedon Progress Association asserted in its tourist guide that 'A business man can leave his office in dusty Flinders-lane of Collins-street at 4:50 p.m. and enjoy his dinner at 7:30 p.m. nearly 3,000 feet above the sea level among the loveliest of scenes and breathing the purest of air ...'

There was a hotel, stores, a horticultural society (1922), two halls, Anglican and Presbyterian churches (the Catholic church was at Macedon), a State primary school (1874), tennis courts and a golf course. In 1935 a memorial to soldiers in World War I was built near the summit. It was a glazed tile cross, 21 metres high, and a tourist road was built to reach it. The cross was damaged by lightning in 1986, and water penetration corroded the steel framework. It was later refabricated.

Golf House at the golf course underwent a series of occupancies after ceasing as a guest house: during World War II it was reserved as an evacuation place and used for the Yooralla School for Crippled Children; later it was St Ursula's Convent School for Girls (1950-55); and finally it was acquired by the Commonwealth Government, becoming the Australian Counter Disaster College and later the Australian Emergency Management Institute. It was destined for removal to Canberra in 2015.

The mountain is in a range which has the Macedon Regional Park of 3290 hectares. In addition to the summit there is the Camel's Hump, a sub-alpine area, and numerous walking tracks and waterfalls.

Mount Macedon's census populations have been: 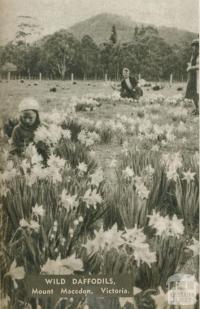 The Cross, through the trees, Mount Macedon, 1949 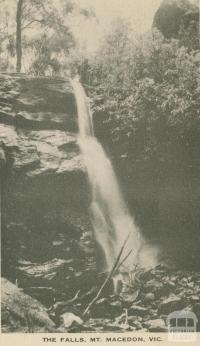 Panorama from the Cross, Mount Macedon, 1949