The geographic Mount Martha is a granitic rise (161m) about 3 km south of the Mount Martha shopping centre protruding into the coastline as Martha Point. It was named by Captain William Hobson, commander of HMS Rattlesnake, after Martha Lonsdale (Smythe) when he surveyed Port Phillip Bay in 1836. Martha Lonsdale was the wife of Captain Lonsdale, Port Phillip’s first Police Magistrate. The Lonsdales travelled to Port Phillip with Hobson on board the Rattlesnake.

Much of Mount Martha was suited to grazing and timber-cutting during the early years of pastoral settlement. A township named Osborne was surveyed in 1858 immediately near the Balcombe Creek, but settlement did not follow. Schnapper Point/Mornington was the preferred place. Balcombe Creek, however, records the Balcombe family which occupied ‘The Briars’ homestead and estate from 1846 until 1976.

During the 1860s-70s there was some farm settlement activity at Mount Martha and the Osborne school was opened in 1872. Of more importance to the future character of Mount Martha a few well-to-do Melburnites built impressive holiday residences, two examples in the Esplanade being CraigieLea (1863) and Woodclyffe (1874). In 1876 Robert Watson purchased land at Mount Martha and during the 1880s mounted a joint venture, Mount Martha Estate, for the sale of over 700 subdivided allotments. An attraction was the Mount Martha Hotel on the Esplanade. The 1890s economic depression ended prospects for the development, but the hotel continued as a resort and guesthouses followed. A burst of residential building occurred in the 1920s, and surviving examples include ‘Glynt’ (1921), and Grey Gables (1928), both in Dominion Road. More modest holiday houses were also built, and a general store was opened.

Since the 1860s land had been kept aside around the Mount Martha summit for a public park. It endured wattle-bark stripping and benign neglect until permanently reserved in 1929. During World War II it was scoured for firewood for the Balcombe military camp, but in 1949 a tree-planting program was begun. It contains a plantation of ornamental conifers. Further exotic tree plantings are on an adjoining boy-scout camp site.

The Balcombe military camp immediately east of Mount Martha and Uralla Road brought upwards of 3000 Australian and American military personnel to the area. Guest houses and the Mount Martha Hotel were also requisitioned for accommodation. The military camp became the Army Apprentices School in 1948 and a housing area in 1990s. During the postwar years there was a quickening tempo of house building, mainly for holiday purposes, but also for permanent residents and retirees.

By 1994 about 70% of the population were permanent residents. There was also a caravan park and camping area on the south side of the mouth of Balcombe Creek (later to become a recreation area with bowling and tennis facilities). Back from there a compact shopping centre developed.

The foreshore reserve and beach either side of Balcombe Creek has boating, yachting and life saving clubs. Further north the beaches are sheltered by headlands, and to the south the coastline from Balcombe Point to Martha Point is without beaches. Housing has nevertheless taken most of the land. Mount Martha public park and the golf course provide open space as an alternative to beaches.

Mount Martha expanded during the 1990s-2000s, merging with Mornington as continuous suburbia. Bentons Square shopping centre, on the border between Mount Martha and Mornington, opened in 2002. Secondary education is found at Mornington Secondary College. Padua Catholic College (Mornington) and at Balcombe P-12 Grammar School (2007) are near the former Balcombe military camp.

Mount Martha has two primary schools and a community house in the former Mount Martha Hotel at the corner of the Esplanade and Dominion Road. The historic showpiece of Mount Martha is ‘The Briars’ historic park formed around Alexander Balcombe’s homestead (1846-66). There are a woodland, a wetland, a vineyard and education facilities. The homestead housed the Dame Mabel Brookes Napoleonic collection until theives targetted the collection and it was moved to a secure location in 2014; Balcombe had befriended Napoleon on St Helena, and Brookes was Balcombe’s grand-daughter.

Mount Martha’s census populations have been: 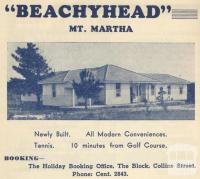 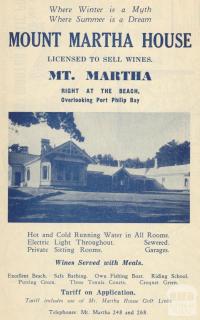 Three views of Mount Martha on the Mornington Peninsula, 1995