Narracan is a rural locality in eastern Victoria 14 km south of Moe. It was named after the Narracan Creek, and the word is thought to have been derived from an Aboriginal word describing a crow.

Narracan is close to McDonalds Track cut from Lang Lang to Morwell in 1862. The earliest evidence of farm settlement at Narracan though was in 1874. A school was opened four years later in the new mechanics’ institute.

In 1888 a railway line from Moe, along the Narracan valley to Thorpdale, was opened. The line carried coal and produce from the rich chocolate soil of Thorpdale and Narracan. In 1903 Narracan was described in the Australian handbook: 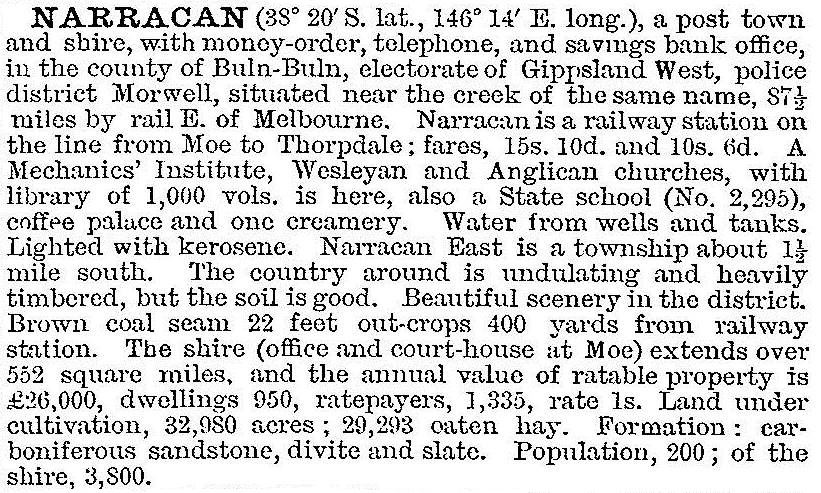 In common with several fertile areas in hilly Gippsland ranges, Narracan underwent closer settlement in the early 1900s. Later experience required amalgamation of farm holdings, although less extensively at Narracan than at other places. In 1958 when the railway closed, the Victorian municipal directory recorded a hall, a church, a free library, a mechanics’ institute, a store and a school at Narracan. The next 40 years saw some of those amenities fall away, but the school has continued, with 18 pupils in 2014, and the mechanics’ institute hall was rebuilt in the 2000s. The Narracan East mechanics’ institute hall is at Gippstown heritage park, Moe.

Narracan’s census populations have been:

John Adams, So tall the trees: a centenary history of the southern districts of the Shire of Narracan, 1978