Narracan Shire (1878-1994) was proclaimed in 1878. Annexations and severances have caused many changes to its boundaries over the years. Walhalla shire was added in 1918 and part of the Yallourn works area in 1973. In 1955, the largest town, Moe, was severed to form the borough of Moe, leaving Narracan shire with 2300 sq km. It is thought that the name derived from an Aboriginal word describing a crow.

Located in West Gippsland, the former shire extended from the Strzelecki Ranges in the south to the Great Dividing Range in the north. Moe was the administrative centre until 1909, when the shire offices were transferred to Trafalgar, 120 km east of Melbourne.

In the northern mountainous part of the former shire, gold was mined at Walhalla and a number of smaller fields. Timber getting then became the main activity. Black coal was mined in the 1880s and 1890s at Coalville in the southern part of the shire. From the 1920s, brown coal was extracted in the Yallourn North area on the eastern edge of the shire. Dairying was the main activity around Trafalgar and Yarragon on the flats of the Moe River and rich potato growing industry developed at Thorpdale in the Strzelecki Ranges. Three water storages, Moondarra (1962), Blue Rock (1984) and Thomson (1983) are located in the north of the former shire.

The Princes Highway and the Gippsland railway (1878) passed through the southern third of the shire. From Moe there were branch railway lines: north through Erica to Walhalla (1910-1954); and south through Coalville to Thorpdale (1888-1958).

In 1994, most of Narracan shire was united with Buln Buln shire and Warragul shire to form Baw Baw shire.

John Adams, So tall the trees: a centenary history of the southern districts of the Shire of Narracan, 1978 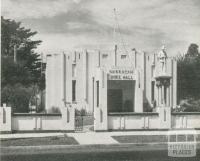