Nowa Nowa is a small rural town on the Princes Highway, east Gippsland, 280 km east of Melbourne and 20 km north of Lakes Entrance. It was named after Mt Nowa Nowa, 5 km to its north. The name is thought to derive from an Aboriginal expression describing a hill of black stones, or a rising sun.

The town is located north of Lake Tyers where the northern-most arm of the lake (Nowa Nowa Arm) narrows into Boggy Creek. The creek soon changes to a deep gorge and the town site was the best of a bad lot for a route from Cunninghame (Lakes Entrance) to Orbost, and north to Bruthen on the Tambo River. Nowa Nowa also served for a couple of years in the early 1890s as a compromise location for meetings of Tambo shire council. Settlement, however, did not occur until the 1900s. A school opened in 1912 and it was the opening of the railway between Bairnsdale and Orbost that brought life to Nowa Nowa.

The railway (1916-87) described a circuitous route via Bruthen before reaching an eastwards trajectory involving two substantial timber trestle bridges. The first at Strong Creek (5 km west of Nowa Nowa) was 276 metres long and survives as a heritage listed structure; the second (63 metres) crosses Boggy Creek. Soon afterwards there were road and bridge improvements and all contributed to a flourishing timber industry. By the 1930s there were six sawmills at Nowa Nowa, with enough people to field the Nowa Nowa - Buchan football team and a rifle club. A Country Women's Association branch opened in 1933. There were numerous mill workers' huts, three stores, a bakery and a hotel.

In the 1950s five sawmills were still in business and two churches opened. The hotel burnt down in 1958 and was replaced with a modern hotel-motel. After the 1961 Australian credit squeeze the sawmill industry fell away but two mills remained. A notable addition to Nowa Nowa was a community health centre (1974) which opened a service for Aboriginal families in the town and from Lake Tyers. In 2007 a 20 km pipeline connected Nowa Nowa to water drawn from the Mitchell River improved water quality for the town.

Nowa Nowa is at the junction of roads from Bruthen and Lakes Entrance and has a few attractions plus walking trails that take in forest and the upper arm of Lake Tyers. There are two caravan parks, a general store, a hotel-motel and the Mingling Waters holiday accommodation. The school had 26 pupils in 2014.

Nowa Nowa's census populations have been:

Bushfires destroyed 4000 hectares near Nowa Nowa in 2011. In 2013 Eastern Iron proposed the creation of an open-cut mine within the Tara State Forest, about 7 km north of Nowa Nowa, to mine iron ore. The deposit had been discovered in 2008 when exploration identified between 50 and 100 million tonnes of haematite and magnetite. 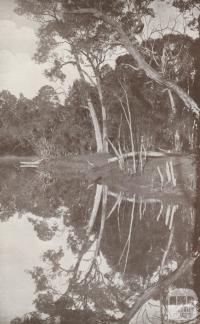 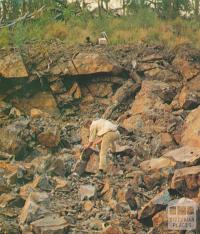 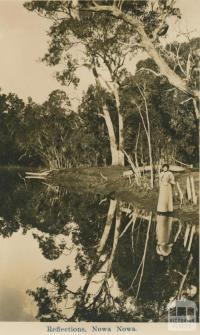