The Otways are an abbreviated name for the Otway Ranges, which derived their name from Cape Otway, the southern-most land between Port Phillip Bay and the South Australian border.

The cape was named by Lieutenant James Grant, Royal Navy, commander of the ‘Lady Nelson’ during an exploratory voyage in Bass Strait. Grant named it after Captain William Otway, one of the commissioners of the Transport Board, on 7 December 1800.

The cape quickly rises to a heavily forested range extending from west of Lavers Hill to east of Lorne. The ridge of the range passes through Beech Forest. A lighthouse was built at Cape Otway in 1848, following several ship wrecks (including the ‘Catargaqui’ with the loss of nearly 400 lives) in 1845. Reaching the ranges was successful only after three attempts to find a suitable place to build the lighthouse, the third on the Australian mainland. In 1859 a telegraph station was constructed near the lighthouse, linking Tasmania and King Island to Melbourne.

In about 1850 timber cutters established coastal timber mills at Apollo Bay and Lorne. On the inland side of the range farm selections were taken up at Deans Marsh (1860s), Beech Forest (1880s) and Lavers Hill (1891). Beech Forest, on the Otway ridge achieved only limited farm output until the narrow gauge railway was opened in 1902, serving numerous stations to which forest sawmills were linked by private tramways. There was also a railway line (1891) from Birregurra to Deans Marsh and Forrest. Both lines carried timber, livestock and dairy produce until their closure in 1962 and 1957 respectively.

Roads link the Otway farm settlements, but the best known Otway route is the coastal Great Ocean Road (1920s) connecting Aireys Inlet, Lorne, Wye River and Apollo Bay. The road then ascends the cape through the Otway National Park (1981). The national park’s area is nearly 13,000 hectares, compared with an original 80,000 hectares reserved for farming and 63,200 reserved for timber. Much of the farmland was steep and became bracken covered, and has since been used for pine plantations. Earlier critics asserted that excellent timber had been needlessly lost by land clearing.

Timber production's peaks have been railway sleepers for the rapid transport expansion after the gold rushes, building timber for homes after World War I and again after World War II. The postwar decline was offset by harvesting for pulpwood, which continued despite growing protests. In 1996 hardwood logging and sawmilling directly employed 210 people, three percent of the workforce of Colac-Otway shire. Critics advocated preserving the forests for tourism, water catchment and biodiversity.

Protests intensified in the early 2000s and in 2002 the state government announced the phasing out of logging licences. The last licence expired in 2008. Over the years about 160,000 hectares had been logged for pulp and sawlogs. The Great Otway National Park and the Otway Forest Park (140,000 hectares, 2006) extends from Princetown to Torquay and from the coast almost to the Princes Highway.

Until 1919 most of the Otway Ranges were part of Colac Shire. The difficulty of maintaining roads persuaded Otway residents to press for separation, and Otway Shire was proclaimed on 6 May 1919. Beech Forest was the shire’s administrative centre, although a large engineering depot was kept at Apollo Bay. The shire’s main agricultural areas were along river valleys and along the ridge, which includes Weeaproinah, reputedly Victoria’s place of highest rainfall.

The shire was described in some detail in the Australian blue book in 1946:

There was a minor loss of population in the shire from 1954 to 1991, nearly all occurring in the non-coastal parts. Apollo Bay took increasing revenue from accommodation as motels were built. In 1994 farming occupied 30% of the shire’s area on which were run 38,470 dairy cattle, 16,500 meat cattle and 24,000 sheep and lambs. The once famous Otway potatoes came to 205 tonnes.

On 23 September 1994 Otway Shire was united with Colac city, Colac Shire and a small part of Heytesbury Shire to form Colac-Otway Shire

Norm Houghton, Sawdust and Steam: a history of the railways and tramways of the eastern Otway Ranges, Melbourne, 1975 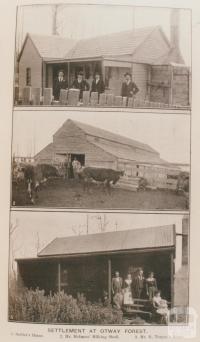