In 1839, four years after the first permanent European settlement of Melbourne, Wilbraham Liardet settled at Port Melbourne, building a hotel and jetty on Hobsons Bay and operating a mail service to Melbourne. The area became known as Liardet's Beach, although the official district name was Sandridge. Land sales were delayed until 1850. The gold rush immigration brought passengers and freight which made use of a government pier on Hobsons Bay, served by Australia's first railway line (1854) from Melbourne to Hobsons Bay.

The first allotments surveyed in Sandridge were between Stokes Street and a linear lagoon on the east, now Esplanade East. (The lagoon was probably an ancient course of the Yarra River.) With the railway, the township was enlarged, westwards to the railway line and northwards to Raglan Street.

A Wesleyan church was opened in 1853, and a Wesleyan school in the following year. By 1860 there were also Anglican, Catholic and Presbyterian churches, a Catholic school and a National school (1857). On 13 July 1860, the Sandridge borough was created by severance from Melbourne City Council, its boundaries being the railway line and the lagoon, but further north to Boundary Street. In addition to the Railway Pier there were the Sandridge Pier and the Town Pier at the end of Bay Street. The Swallow and Ariell Steam Biscuit manufactory was opened in Rouse Street in 1854, beginning with ships biscuits and expanding to become a major industry by 1880. Thomas Swallow was the Council's second mayor and was influential in several of its community activities.

The borough remained confined between the railway line and the lagoon because of a planned canal between the Yarra River and the bay and the increasingly noxious condition of the lagoon, contributed to by the run-off from Emerald Hill, South Melbourne. Ideas to make the lagoon a dock did not materialise, and it remained a harbour for small craft.

The coast west of the Railway Pier was Sandridge Beach or Fishermans Bend, which was added to the borough in 1863. Its sand was extracted for Melbourne's building trade, and in some cases the excavations were used as night-soil dumps. Bone mills, goats and pig-keeping added to the effluvia.

Since almost the first local election the Council had met in the court house (1861), and in 1869 the first town hall was built in Bay Street. After congested accommodation in the church schools and the National school, a State primary school was opened in Nott Street in 1874. The Australian handbook described Sandridge in 1875: 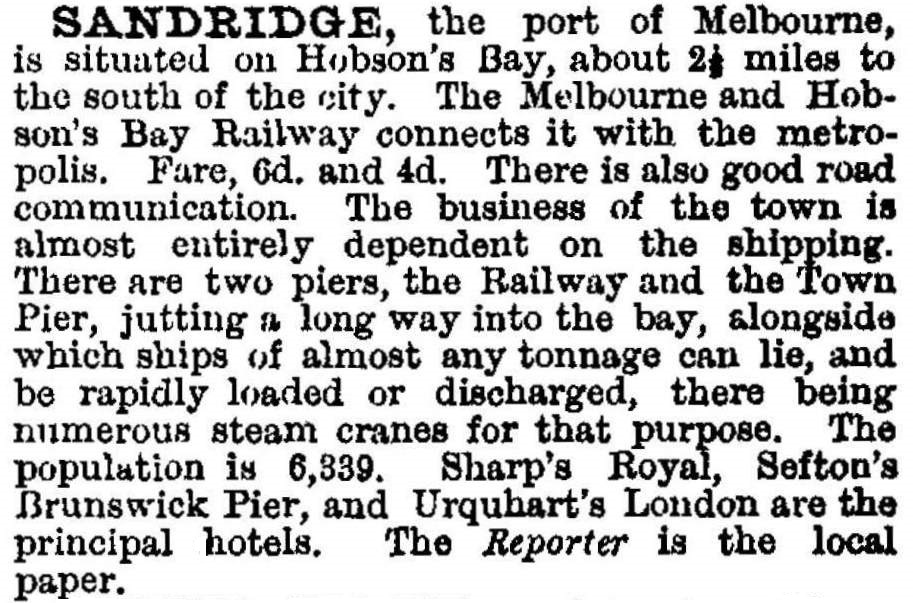 A large factory in Sandridge was the Victorian Sugar Works. In 1875 it was destroyed by fire, not least because of inferior water pressure from the Yan Yean supply for fire fighting. Rather than rebuilding, the owners moved across the river to Yarraville, causing major job losses.

The vacant land around the borough provided venues for cricket and football. North Sandridge Cricket Club was formed in 1867 and teams were fielded by factories such as Kitchens Soap and Swallows. In the next decade the Sandridge Football Club was formed. Sea swimming carnivals had been held since the 1860s.

In 1877 the Melbourne Harbor Trust was formed, with jurisdiction over much of Sandridge’s municipal area. It engaged an English engineer, Sir John Coode, to design an improved shipping link between Melbourne and the bay. The Yarra River ran in a loop from today’s Appleton Dock, up almost to Footscray Road and entered today’s Maribyrnong River opposite the Footscray Wharves. The Coode Canal, 700 metres long, 90 metres wide and 8 metres deep was cut, forming a new Yarra River mouth and creating Coode Island. The island was used for quarantine purposes. Port Melbourne’s municipal boundaries retained the approximate shape of the old river until 1992. The canal did not, as local opinion feared, cause a worsening of the lagoon’s tendency to flood, as happened in 1863 and 1878. It also provided for a new Port of Melbourne downstream from Melbourne.

During the 1880s Sandridge’s population increased by 60%. Housing was built west of the railway line, the town hall was finished, the Coode Canal opened (1887), a second primary school opened in Graham Street and a cable tram began along Bay Street. The municipality’s name changed to Port Melbourne in 1884 and it became a town on 20 January 1893. The Council reserved land for parks and gardens, and pressed on with tree planting in place of the saplings being uprooted by vandals.

Port Melbourne was not as heavily industrialised as Collingwood or North Melbourne, but many stevedores, who relied on the port, lived there. The 1890s depression witnessed the creation of the Progressive Political League and, with the support of the Trades Hall and the Socialist Party, Port Melbourne elected its first Labor member of the State Parliament. The community’s healthy prospects improved in 1897 when sewerage was connected throughout Port Melbourne. In 1903 the Australian handbook described Port Melbourne: 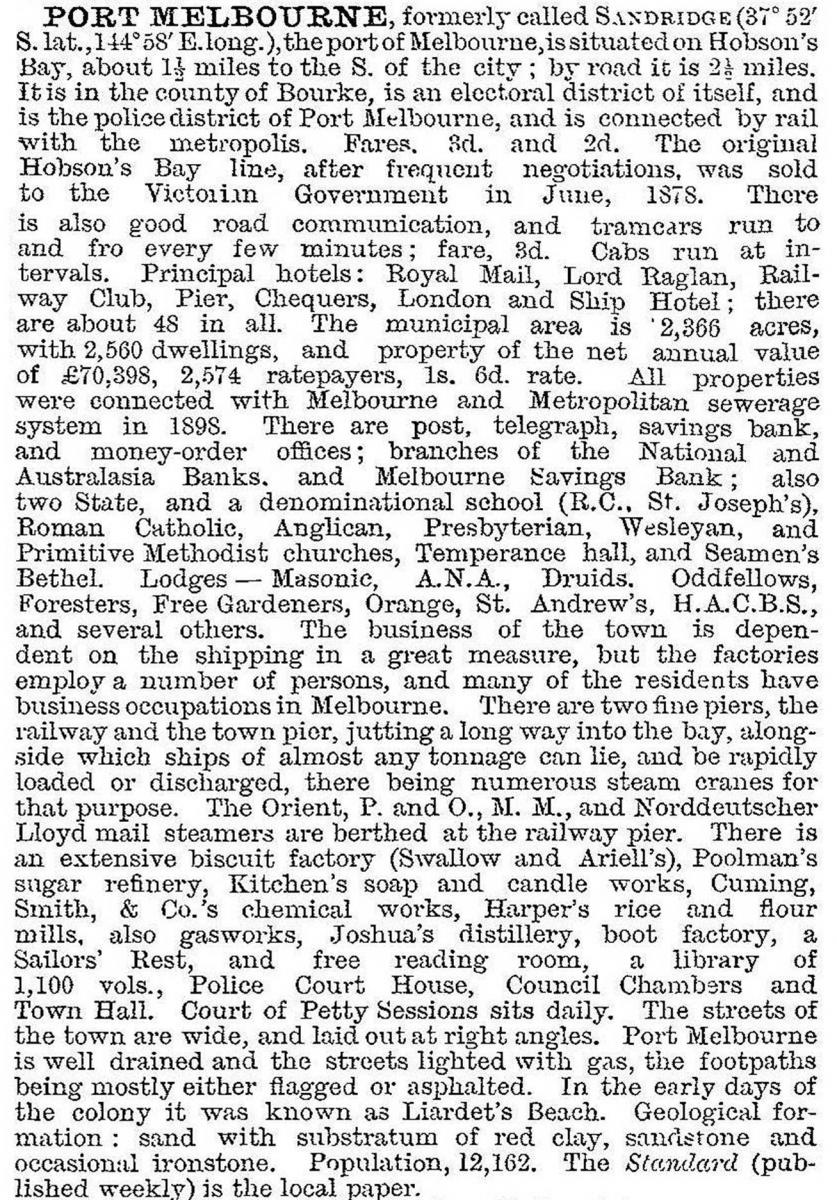 In 1906 residents petitioned the Council for the building of workers’ houses at Fishermans Bend. The Council responded favourably and began its campaign for the State Government and the Harbor Trust to unlock the Bend’s land for housing. Whilst the Government had been able to grant land for a golf club, it dithered over land for housing. In 1904 it even reopened a sand pit, and later that year a fire destroyed the Council’s marram grass planting which had stabilised the Bend’s sand drifts. Nothing useful happened. In 1914 the Council took up the British Garden City as a housing concept, which coincided with the decision to dump silt dredged from the Yarra River shipping channel on the Bend’s land instead of in the bay. The silt reinstated the layer of sand which had been mined for the building trade.

A housing enquiry in 1914 verified the substandard dwellings of many Port Melbourne residents, but still the Government and the Trust prevaricated. At last in 1926 the State Savings Bank responded to the Council’s pleadings and acquired land near the Graham Street primary school for a housing estate. The Bank’s estate and the subsequent houses built by the Housing Commission comprise Garden City.

During the 1920s unemployment occurred in Port Melbourne, and a waterside workers’ strike in 1929 resulted in the death of a unionist from a police bullet. The employment of scab labour to break the strike produced bitterness that lasted into the 1950s. The 1930s depression worsened unemployment.

In 1935 24 hectares of land at Fishermans Bend was set aside for the General Motors Holden car plant, and in the following year more housing in the Garden City area was begun. The Holden plant was completed by 1936 and by the outbreak of World War II Fishermans Bend also had the Government Aircraft Factory, foundries, paint factories and other industrial plants.

Port Melbourne was described in the 1946 Australian blue book: 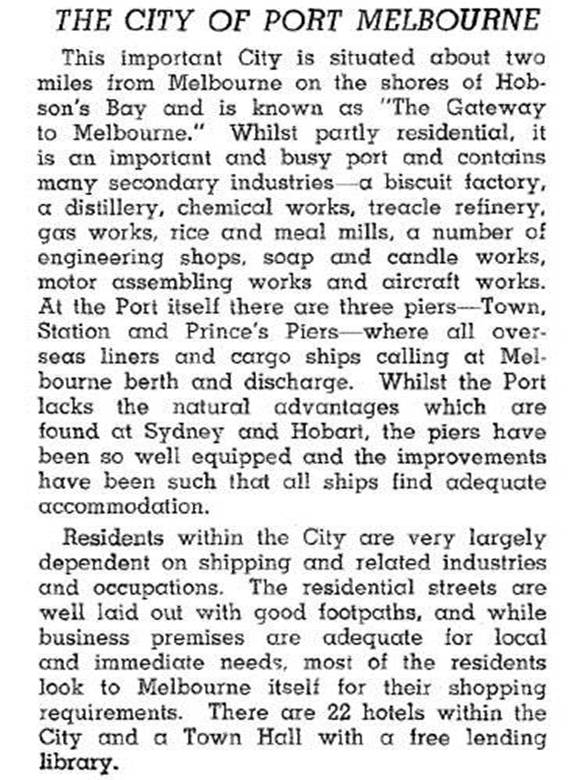 East of the railway line the lagoon had been filled and replaced by grassed reserves and a new kindergarten (1929). Station Pier’s rebuilding was completed by 1930 and would become the place of entry for Victoria’s postwar immigration. As well as having that enormous population flow, Port Melbourne’s resident population was matched by the Fishermans Bend day time population of about 13,000 workers. The postwar years were favourable to Port Melbourne in terms of employment, housing improvement and football premierships. In the 1950s and 1960s Port Melbourne Football Club won three premierships and were runners up six times. The Labor Party split seriously affected local politics, but it ushered in Labor domination of the Council.

Transport to and through Port Melbourne changed during the 1970s and 1980s. The Westgate Freeway, with a bridge rising over the Yarra River, was opened in 1978, along an S-shaped route, across Fishermans Bend. The view of the land below the bridge revealed its marshiness and potential for recreation. The Westgate Park was built around habitat for migratory birds.

The cable tram along Bay Street was closed in 1937, and after the 1960s the railway line served fewer passengers as Station Pier was overtaken by air travel and the resident population of Port Melbourne fell. In 1987 the trains were replaced by trams connected to the road network. The trams pass through a linear parkland from Boundary Street to the former Port Melbourne railway station.

Port Melbourne became home to postwar immigrants, particularly British born during the 1960s and Greek born in the 1970s. The Australian born residents fell from 93% of the total Port Melbourne population in 1947 to 67% in 1976.

Open space east of the railway line is confined to reserves on the reclaimed lagoon and the beach with a yacht club and a small harbour. West of the railway line there is the Murphy reserve with ovals and other facilities, the Port Melbourne Cricket and Recreation Ground, and Garden City with neighbourhood reserves and the Sandridge beach.

Several of the former industrial sites were recycled during the 1990s for residential living. A large one, north of Princes and Station Piers, was launched in 1987 as an ambitious development site. Following discovery of contaminated ground and a scaling down after the property crash in the 1980s it became a residential development known as Beacon Cove.

Port Melbourne’s proximity to central Melbourne attracted gentrification by the 1980s. In 1987 the median house price in Port Melbourne was 25% above the metropolitan median, rising to 93% in 1998.

An independent secondary school was planned to open in Port Melbourne in 2016. The independent secular Sandridge School is set to open to year 7 students and will be housed in a heritage art deco building at the old Symex soap factory to service the growing suburb of Fishermans Bend.

The census populations of Sandridge/Port Melbourne municipality were:

The census populations of the Port Melbourne suburb (the same area as the former municipality except for the industrial part north of the river) have been:

The increased population reflected the high density dwellings that had been built. At the 2011 census, occupied dwellings in Port Melbourne were:

Linking us together: a history of transport in the Port Phillip community, Port Melbourne, 2001 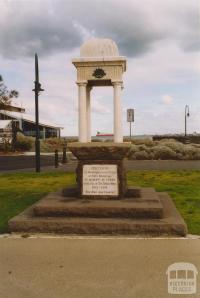 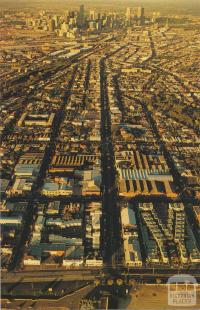 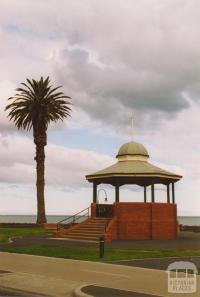 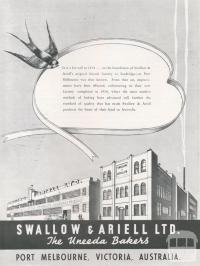 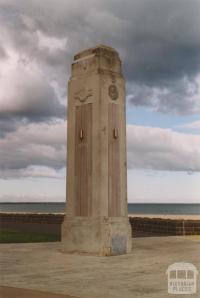