The Port of Melbourne has extended from Williamstown and Port Melbourne on Hobsons Bay, to the part of the Yarra River known as Queens Wharf, opposite William Street, central Melbourne.

When the `Enterprize', a vessel carrying settlers from Tasmania, entered the Yarra River in August 1835, it stopped short of the rocky river bottom which was opposite Market Street, Melbourne. Settlement in that vicinity was commenced, as boats could not be navigated upstream and, within a few hundred metres, drinking water could be fetched from beyond the rocky falls. Within four years a primitive wharf was functioning on the north bank of the river, and a customs house was built between William and Market Streets. Downstream, between Spencer and King Street, private wharves were built, the best known being Coles.

Across Hobsons Bay the township of Williamstown was laid out in April 1837. A jetty made of boulders was completed in February 1839. A private pier was built at Sandridge (Port Melbourne), by Wilbraham Liardet in 1839. Both these bayside facilities came about because of the difficulty of navigating the river which, before the construction of the Coode Canal, had an S-shaped course through the West Melbourne swamp lands.

The goldrush immigration years in the 1850s caused acute congestion of the port. The unloading of goods and passengers was helped, though, by the building of the Melbourne to Hobsons Bay railway and the construction of the Railway Pier (now Station Pier), Port Melbourne. In 1851 the Colonial Architect and Melbourne city's surveyor proposed the cutting of a canal across the swamp lands to relieve the congested river. Eight years later the first of four reports recommended the formation of a separate body or harbour trust to manage all the port facilities.

With the support of the Melbourne Chamber of Commerce the Melbourne Harbor Trust was established in 1876 and within three years it had a report from Sir John Coode, an English harbour engineer, recommending the route of a canal, not along the shortest possible route to Hobsons Bay, but cutting off the sharpest loop of the river meander (from approximately today's Appleton Dock to south of where the Maribyrnong River enters the Yarra). The route avoided high velocity currents from Hobsons Bay, and retained the scouring action of both rivers' flows to cut down silt deposition at the river mouth and around Williamstown. The Coode Canal, opened in 1886, 1800 metres long, 100 metres wide, and under 8 metres deep, left Coode Island to its north. The island was joined to West Melbourne as the meander was land-filled.

Port Melbourne had 38% of the lineal wharves' length, Williamstown 26% and the up-river areas 36%. The up-river Queens Wharf area was situated on a naturally wider part of the river, sometimes likened to London's Pool. At various times it had been a quagmire, a receptacle for waste from slaughter yards and discarded tallow, and an unsightly collection of flotsam. Its proximity to Flinders and Spencer Street stations and the Melbourne Fish Market preserved its activity, but by the 1950s the northern side had been substantially filled in for land reclamation. There were also wharves along the south side of the river.

In 1892 the West Melbourne Dock (later the Victoria Dock) was opened, downstream and immediately west of the Spencer Street railway shunting yards. It contained a swing basin for ships, replacing the one which had been provided on the south side of the river, later to be the Duke and Orr dry dock, west of the Charles Grimes Bridge. Further west was the South Wharf along the river bank.

Shortly before the opening of the Coode Canal the piers at Williamstown were lengthened, the largest being the Breakwater Pier. There were also minor wharves along the west sides of the Maribyrnong and Yarra Rivers, and the latter were later developed for bulk cargoes.

The spacious Victoria Dock was hampered by a shallow river entry until the Canal was deepened to 8.2 metres in 1917. Meanwhile a second railway pier was built at Port Melbourne in 1914, and named Princes Pier in 1920.

Deep draught vessels continued to put pressure on the Port's harbour facilities and the construction of the Spencer Street bridge in 1929 effectively closed the Queens Wharf area to all but the smallest craft. In anticipation of this a new harbour at the mouth of the Moonee Ponds Creek had been commenced (1926), to become Appleton Dock, and South Wharf was extended west. Williamstown's Nelson Pier was extended in the late 1920s for bulk cargo, particularly wheat. While the excavation and fitting out of Appleton Dock was under way Station Pier was rebuilt in 1930.

Oil wharves were on the west side of the Yarra at Newport, Spotswood and Yarraville. They were later concentrated at Yarraville, for bulk ammonia, sugar, phosphate and soda ash. The Holden Oil Dock is the southern-most facility at Yarraville. There are oil and gas cargo wharves at Williamstown and opposite Holden Dock on Coode Island.

Containerised cargo resulted in Webb Dock (1959) being constructed on Hobsons Bay, downstream from Appleton Dock and Swanston Dock (1966), between Garden City and the river mouth. Swanson Dock was excavated out of Coode Island and Webb Dock was built by both excavation and land reclamation.

By the end of the 1980s Swanson Dock handled about one-third of the port's total trade, Webb Dock about one-sixth and Victoria Dock the same. Smaller volumes went through Appleton Dock and South Wharf.

The opening of the Charles Grimes bridge (1975) was followed by the closure of the upstream South Wharves on the Yarra.

The Port of Melbourne was brought under the Melbourne Harbor Trust in 1876, which in 1978 became the Port of Melbourne Authority. It was headquartered in the Harbor Trust building in Market Street, Melbourne, until it moved to its World Trade Centre (1983), west of the Spencer Street Bridge. Opposite the Centre, on the other side of the river is the former Little Dock, with the Melbourne Maritime Museum and the barque ‘Polly Woodside’. The Authority's territory stops at the Spencer Street Bridge. Further up the river the Queens Wharf ‘Pool’ has been filled and the reclaimed land made into Batman Park, after first being a car park area. Batman Park adjoined the site of the architecturally ornate but ultimately decrepit Melbourne Fish Market. The Park's most prominent structure is the yellow painted sculpture ‘Vault’, which fortuitously found a better home than its original position in Melbourne's city square.

The Authority's territory occupies most of Coode Island south of Footscray Road, ribbons of foreshore down to Williamstown and around Port Melbourne and a large area around Webb Dock. Appleton and Swanston docks have railway connections to the West Melbourne freight terminals. Webb Dock had a railway line. The railway lines to the Williamstown piers, however, have been taken up, and Station Pier lost its railway to a tram passenger service in 1987.

In 1989 the State Government released a plan for the redevelopment of the old docks and wharf areas on the Yarra River, west of Spencer Street to the Bolte Bridge. The area became Docklands, extending north to Footscray Road and entirely enclosing the former Victoria Dock.

Since the 1960s maritime cargo has been increasingly carried in shipping containers. In 40 years container ship draughts increased from 9 to 14 metres. In anticipation of them getting deeper by 2020, the Port of Melbourne had the Port Phillip Bay shipping channels dredged and deepened in 2008-09. The dredging raised concern about sediment plumes and damage to marine life. 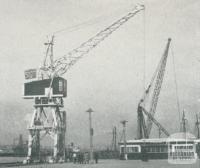 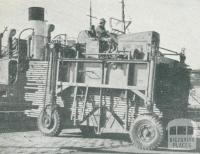 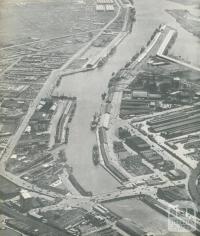 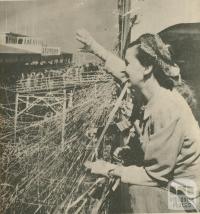 Passenger Ship at Port of Melbourne, 1950