The name began with the bay, the body of water with an area of 1890 sq km positioned approximately midway along Victoria’s coastline. It is entered between Point Lonsdale (western side) and Point Nepean, the ends of those two being known as the Heads.

Port Phillip Bay was reached in 1802 by Lieutenant John Murray in command of HMS Lady Nelson. Murray named it Port King, after the New South Governor, but King renamed it after the colony’s first Governor, Arthur Phillip.

The entry to the bay is known as the Rip because of the swift tidal movements through it. The Rip is mostly deep water but there is the dangerous Cosair Rock off Point Nepean. Inside the Rip the bay consists of relatively shallow water through which there are two channels of deeper water. Most vessels use the South Channel which runs eastwards from the Rip until turning northwards opposite Dromana.

There are two important smaller bays enclosed by Port Phillip. At the northern end is Hobsons Bay, into which drains the Yarra River. Central Melbourne is a few kilometres upstream of the river’s mouth. On the west is Corio Bay on which there is the port of Geelong.

The Port Phillip District was the name given to the southern district of New South Wales in 1839 for the purposes of government and administration. It came about from an unlawful settlement by residents of Tasmania in the area around Melbourne in 1835. One of the settlement groups (under John Batman) was the Geelong and Dutigalla Association, which was renamed the Port Phillip Association in about March 1836.

The futility of resisting settlement around Port Phillip was acknowledged in 1837 when the New South Wales Governor named Melbourne and Williamstown, after having appointed Captain William Lonsdale as his representative and Police Magistrate at Port Phillip the year before. In 1839 Charles LaTrobe was appointed Superintendent of the Port Phillip District which was defined as the areas bounded by the South Australian border, the coastline, longitude 146 degrees east and latitude 36 degrees south. The latitude and longitude coordinates meet at Yarrawonga, thus excluding from the District parts of northern Victoria, including the Mallee, and eastern Victoria, east of Yarrawonga and Wilsons Promontory. This latter exclusion was surprising because north-east Victoria had been reached by New South Wales pastoralists since 1835. Possibly it indicated a wish to keep the area as part of central New South Wales rather than in its southern (that is, Port Phillip) district.

In 1840 Lord John Russell moved the district’s boundary northwards to the Murrumbidgee River. This over extension was rectified in 1843 when a proclamation was published on 1 July in the New South Wales Government gazette defining the Port Phillip District as the place bordered by the colony of South Australia (on the west), the Bass Strait coastline to Cape Howe, a line from Cape Howe to the nearest source of the Murray River, and thence the Murray River to the western border; in other words, the place that was named Victoria when the district was separated from New South Wales in 1851, and which remains as Victoria to the present day.

The Port Phillip Region is an expression used to denote all the hinterland around the bay. It is more than metropolitan Melbourne, as it includes Geelong, the Bellarine Peninsula and Mornington Peninsula.

By 1998 the same region had been slightly enlarged west, north and east. Overall, the Port Phillip Region’s boundaries are usually defined by reference to the particular topic under discussion.

Three large and one lesser river systems drain into Port Phillip Bay. The lesser one is the Little River, which has headwaters south of Bacchus Marsh. (A larger system, also on the western side of the bay, is the Moorabool/Barwon Rivers, with more distant headwaters. They do not enter the bay, however, but cross the Bellarine Peninsula to Bass Strait.)

The north-western system is the Werribee River and its numerous tributaries, along with the Kororoit Creek. The headwaters are at Ballan, the Blackwood Ranges and a short way south of Gisborne. Its area is 1937 sq km. Another north-western system is the Maribyrnong, with headwaters near Macedon and Kilmore. Its area is 1421 sq km. The largest system is the Yarra, north and east of Melbourne. The headwaters are numerous, the several tributaries beginning near Wallam, the Plenty Ranges, Narbethong and Lake Mountain. The Yarra River’s headwaters are about 20 km east of the Upper Yarra Reservoir, near Tanjil Bren. There are also tributaries from the Gembrook area. The Yarra system’s area is 4096 sq km. On the south-eastern side of the bay there is the Mornington Peninsula. Most of it drains into Western Port Bay and Bass Strait.

About 10,000 years ago the Yarra River flowed across an uplifted, dry bay, and entered Bass Strait through the Heads. The end of an ice age caused a rise in sea levels and the flooding of the former dry land.

In 1994 Port Phillip City, a municipality consisting of the former cities of Port Melbourne, South Melbourne and St Kilda was formed. It is described in a separate entry.

Thomas Fitchett, Down the bay: the story of the excursion steamers of Port Phillip, Adelaide, 1973

Gary Presland, The place for a village: how nature has shaped the city of Melbourne, Melbourne, 2008

Andrew D. Short, Beaches of the Victorian coast and Port Phillip Bay: a guide to their nature, characteristics, surf and safety, Sydney, 1996 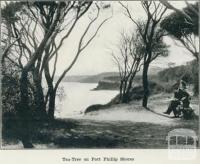 The Heads, the entrance to Port Phillip Bay looking towards Point Nepean from Point Lonsdale