Port Welshpool, a rural village, is 165 km south-east of Melbourne and north of the toe of Wilsons Promontory. Welshpool is 7 km north of Port Welshpool, on the South Gippsland Highway.

Port Welshpool was originally just Welshpool. It is surmised that it was named after Welshpool, Wales (named in 1835) or after Patricias Welsh, an associate of John Batman, who landed supplies at Corner Inlet.

When the Great Southern railway was extended from Toora to Port Albert in 1892 a railway station was opened at present day Welshpool. The port village was unofficially called Port Welshpool, but not gazetted by that name until 1952. Welshpool on the railway line had ‘Welshpool Railway Station’ school until 1947, when the school’s name was shortened to Welshpool.

A town was gazetted at the coastal Welshpool in 1851, as Welshpool port was a potential contestant with Port Albert for the carriage of supplies into Gippsland. A jetty was built in 1859, but when John Stanley, the ‘Vagabond’, visited Welshpool in 1886 he found a ‘snug harbour ... unused, and all the produce of Gippsland .. .taken to Melbourne’, either by rail or from the Gippsland Lakes.

During the 1860s to 1870s the jetty was used by fishers and the catch placed on train wagons for Melbourne. The trade increased the population, and a school was opened at the railway station in 1890. A second school opened at coastal Welshpool in 1900.

Fish catches were put on a tramline between the jetty and the train station from 1904, and the tram ran until 1940.

In the 1930s a long jetty was built at the port. It was used during World War II by minesweepers and for refuelling of vessels. In the 1960s Port Welshpool was used by ships and barges for oil exploration in Bass Strait.

Port Welshpool has had a long association with livestock. Sheep and cattle have been off loaded there from Flinders Island and other Bass Strait islands. A few kilometres offshore from Port Welshpool there are Little Snake Island and Snake Island. For most of the twentieth century dairy and meat cattle were mustered at Welshpool and taken across the shallows for agistment on Snake Island. The annual event required skilful droving to avoid loss of animals, and was looked forward to as a holiday and a gathering of Strzelecki farmers. The islands are now a coastal park.

Port Welshpool experienced a new wave of optimism in 1990 when the SeaCat, a wave piercing catamaran, commenced a passenger and vehicular ferry service to Tasmania. A terminal building and landing ramp were constructed and, although only operating over the summer months, brought considerable business to the area. However, the service did not recommence in late 1993. Promair, a commercial passenger air service, located between Port Welshpool and Welshpool also ceased operation in 1995. The long jetty was closed to public access in 2004 because of fire damage. The State Government and Gippsland Ports began restoration of the long jetty in 2012. The Port Welshpool Timber Long Jetty Restoration group, supported by the Port Welshpool Working Group, The Gippsland AMFEU and the National Trust of Victoria, pushed for the restoration of the Long Jetty to be in timber as in the original design.

Port Welshpool is a popular base for recreational fishing. A maritime museum depicts the history of the town, displaying a fishing boat, shells, fish and farming pools. The museum is a heritage registered cottage built in 1873. Along the main street there are a general store, a hotel and a caravan park. Seaforth Haven, a cafe and restaurant, was originally located at Seaforth, a town surveyed on the northern point of Wilson’s Promontory. The town never eventuated and the building was brought by barge to Port Welshpool in 1893.

Welshpool has a public hall, a golf course, a rural transaction service, a hotel, Anglican, Catholic and Uniting churches.

The Port Welshpool school closed in 1993.

B. Collett, Wednesdays closest to the full moon: a history of South Gippsland, Carlton, 1994

Jack Loney, Shipwrecks at Port Welshpool and other memories, 1990

Cheryl Glowrey, Snake Island and the cattlemen of the sea, 2000 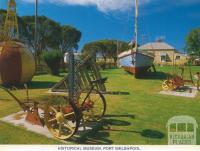