Rockbank is a small township with rural surrounds 28 km north-west of central Melbourne, on the Western Freeway between Melton and Deer Park.

An early European settler of the Rockbank district was William Yuille. He shipped sheep from Tasmania to Point Henry in 1837, and moved inland to a run he named ‘Ballarat’ in 1838 (the forerunner of the provincial city). Between then and 1846 he visited New Zealand and went into business when, with his business partner, he took up the Rockbank run. An early recorded observation was a stay at the solitary Rock Bank Inn in 1854, by when the road to the gold fields passed through the area.

The name is derived from the stone-strewn ground, which provided material for dry-stone walls around the paddocks. Despite the appropriateness of the name, however, the primary school was named New Cambridge from its opening in 1868 until 1906. Rockbank received a brief description in the 1903 Australian handbook:

Rockbank's pastoral and agricultural hinterland contained a large site for the Royal Australian Army Signals, separated from the small township by the Freeway. The township has a general store, hall, service station and railway station. The recreation reserve, caravan park and housing subdivision are nearby. The caravan park’s office is the former Rose and Crown hotel (1875).

Well to the east, near the Kororoit Creek, the bluestone Deanside woolshed complex stands. It is on the Victorian Heritage Register. In the south on Greigs Road West, Mount Cottrell, there is the heritage-listed Rockbank Australian beam wireless receiving station (1926-69). Rockbank primary school had 66 pupils in 2014. 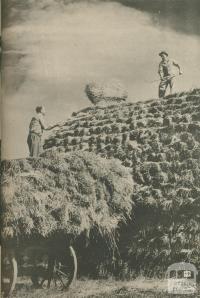